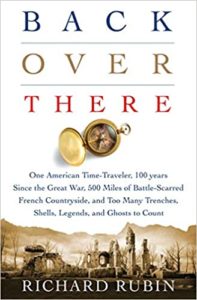 World War I has captured my interest, and part of the reason why is because of the way Rubin writes about it. I first read The Last of the Doughboys which recounts some of the members of the American Expeditionary Forces time in France and I loved it. I was very excited when I discovered that the author had written another book, also about World War I: Back Over There: One American Time-Traveler, 100 Years Since the Great War, 500 Miles of Battle-Scarred French Countryside, and Too Many Trenches, Shells, Legends and Ghosts to Count. I learned so many fascinating pieces of history while I was reading this. The last soldier killed was an American from Baltimore (Private Henry Nicholas Gunther) who was shot at 10:59 on November 11th 1918, one minute before the war ended. Germany tried to entice Mexico to join the war on their side by promising them New Mexico, Texas, and Arizona if Germany won. In the last forty-seven days of the war 26,277 Americans were killed, just in the Meuse-Argonne area. Germany built huge rest camps for their soldiers within France that contained housing, kitchens, bowling alleys, casinos, and swimming pools. They would have 14 days of rest there and then return to the front for 28 days. In the last 72 hours of the war, as the armistice was being reviewed but before it had taken place nearly twenty-two thousand casualties were incurred.

“Memory is stored everywhere here- in the soil, and the rocks, and the roads, and the trees.” Richard Rubin states about one particular area in Woevre, France, regarding World War I. However, in reading Back Over There, it seems true for every place where fighting occurred from July 28th, 1914 to November 11th, 1918. Within the first twenty pages, as Rubin describes tromping around different fields in the Argonne, he finds a German cartridge, a Bavarian button, 5 bullets in perfect condition (also German), and an unexploded 37-millimeter American gas shell. One would think that a hundred years would bury relics like these but as Rubin explores dozens of battlefields, trenches and bunkers he continually finds items like these and some even rarer and more precious. The Great War is still a big deal over there, there are cemeteries containing thousands of dead everywhere- French, German, American, British, and more. There are underground chalk quarries along the Chemin des Dames (The Ladies Way) with carvings and graffiti from German troops who used them for shelter in 1914 and Americans who used it for the same purpose in 1918. There are railway lines, and bunkers, and bathhouses all along the Western Front. One farmer is even using a German blockhouse as a storage shed. Even without these still standing physical reminders from one of the worst conflicts in the world, it’s still a part of living memory. Germany made their last reparation payment in 2010, and the last veteran passing in 2012 at the age of 110.

Other books by Rubin include Confederacy of Silence: A True Tale of the New Old South and The Last of the Doughboys: the Forgotten Generation and their Forgotten World War. Rubin is also a freelance writer and has published articles in many newspapers.

Some other World War I books are:

The Last of the Doughboys by Richard Rubin

World War I and America: told by the Americans who lived it by Scott Berg

The World Remade: America in World War I by G.J. Meyer

The Guns of August by Barbara Tuchman