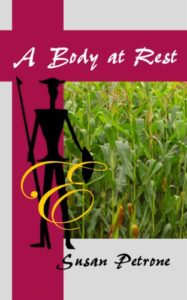 Each month members of the Matchmakers team create unique book displays for patrons to browse on the 2nd floor of the Lee Road branch. Last month, I made a display that featured novels by local authors. One book I enjoyed reading was A Body at Rest, by Susan Petrone, which is actually super-local since it is mostly set in Cleveland Heights. Scenes takes place at Tommy’s, Wade Oval, and even The Cleveland Clinic.

The book follows Nina and Martha, two twenty-something best friends who are fed up with their current food service jobs.  One night, they decide to quit the bar and hit the road, not sure where they’re going but desperate for a change.

A series of escapades transpire along the way, including selling off their worldly possessions, raiding a lost and found room, and inciting a worker’s revolt at a truck stop diner. But it’s not until they commemorate their journey with tattoos that things really take a turn…

Back in Cleveland, the girls start to notice some strange things happening. They had decided to get tattoos of their favorite literary characters in Iowa and now Nina is getting taller and growing facial hair, while Martha is beginning to speak with a fancy British accent. Nina’s discovery that their tattoos have disappeared provokes the sudden realization: “the tattoo is no longer on me, it’s in me.” They have turned into Don Quixote and Emma Woodhouse!

Petrone manages to make the fantastical believable through her use of authentically portrayed characters. I found myself relating to Nina and Martha’s post-college lives, especially since the area they lived in was so familiar. She skillfully combines comedy and romance in this lighthearted adventure story.

Will Martha find a way to break the spell and free her knight-errant friend before it’s too late? A Body at Rest is a quixotic tale that will keep you on the edge of your seat to the very end.

Susan Petrone’s other books, Throw Like a Woman, The Super Ladies, and The Heebie-Jeebie Girl are all available at Heights Libraries.