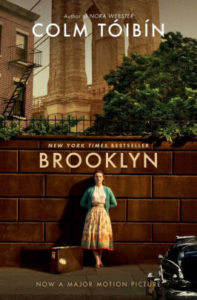 A few months ago, I saw the movie version of Brooklyn and I absolutely adored it, so I just had to read the book it was based on by author Colm Tóibín. It is the story of a young Irish woman named Eilis Lacey who has fairly routine life in a small Irish town in the 1950s. She worked on Sundays at a local grocery store, took care of things around the house and her mother, and went to the town dances with her best friend Nancy where she giggled at boys with too much grease in their hair. Rose, Eilis’ older sister, wanted a better life for her sister. With the help of a priest, Father Flood, Eilis got the chance of a lifetime: a job offer in America.

The story follows Eilis across the Atlantic, through the doors of Ellis Island, to her boarding house in Brooklyn. She began working in a department store, became homesick, and started taking night classes. She lived a fairly routine life, not unlike the one she had in Ireland, until she met Tony. Tony is a handsome Italian plumber who went to the Irish Friday night dances Eilis attended with the girls from her boarding house. He quickly swept Eilis off her feet and they fell deeply in love. When tragedy strikes back in Ireland, Eilis must decide which life she wants to live: her new life in Brooklyn, or one at home in Ireland.

Check out both the book  (Overdrive Ebook/Audiobook) and the movie!