When you were growing up, maybe about, oh, in fifth or sixth grade, did you ever read Ellen Raskin’s book The Westing Game? It’s a smart, award-winning book with unforgettable characters and a really twisty plot. It’s got a lot of appeal for adult readers as well! This one, as well as all the others in this post, is available as an ebook AND an eaudiobook so you can get them while the library is closed! 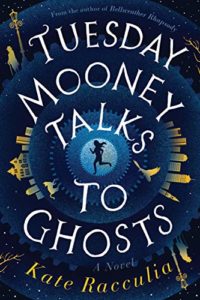 And there’s great news for those of us who loved, and continue to love, The Westing Game. It’s a novel by Kate Racculia that came out in October of 2019 and it’s called Tuesday Mooney Talks to Ghosts. The story is set in contemporary Boston, and if you’ve ever been to or especially lived in Boston, you’ll get an extra dollop of enjoyment out of this book.

Tuesday is a solitary woman in her early thirties who works for a big hospital system as a prospect researcher in the development office. That means it’s her job to learn as much as she can about wealthy Bostonians who might be willing to make significant donations to the hospital. One evening, while Tuesday is volunteering at a benefit, one of her prospects, the eccentric Mr. Vincent Pryce, unexpectedly collapses and dies just as he’s competing in a bidding war at the event’s auction. The next day, in the Boston Globe, an obituary appears, not only inviting the public to a funeral masquerade ball on Boston Common, but also to play a game to track down Mr. Pryce’s legacy.

Tuesday, a natural investigator, can’t resist. Her adventures lead her all over the city. The cast of supporting characters is terrific, including a mysterious billionaire, her best friend Dex, and her teenage neighbor Dorry. The story is a bit dark and macabre, but it’s also chock full of zany humor and a fast-paced and exciting plot.

If you also like your fantasy dark and macabre, try The Watchmaker of Filigree Street by Natasha Pulley.

If you like zany mysteries, try The Unfortunate Decisions of Dahlia Moss by Max Wirestone.

If you like books set in Boston, try The Art Forger by B.A. Shapiro.