Now that we’re living in a world where time feels like a construct, I thought it would be a perfect opportunity to highlight three books that play with time in different, interesting fashions. These aren’t what I’d consider science fiction books, but they do use time to push the narrative forward and drive character development. 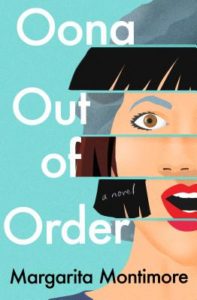 Oona Out of Order by Margarita Monitmore

In Oona Out of Order, you first meet Oona in 1982, on New Year’s Eve, which also happens to be the day before her 19th birthday. Oona is torn between spending a semester abroad in London or going on tour as the keyboardist in her boyfriend’s band, but she’s caught up in the happy moments at a New Year’s Eve party. As the countdown to the New Year begins, Oona faints and awakens 32 years in the future in her 51 year old body. Greeted by a friendly stranger in a beautiful house she’s told is her own, Oona learns that with each passing year she will leap to another age at random, Quantum Leap Style. As Oona hops between decades and different times in her life, she learns to juggle the complexity of her new reality, often struggling to build meaningful relationships and friendships with people outside of her close circle that knows the truth. Oona Out of Order was a really engaging character study and it was one of those books I never wanted to end. I would have loved to experience Oona’s whole life with her, but the snippets we see are proof that Oona is living a rich life, despite her rather unorthodox way of living it. 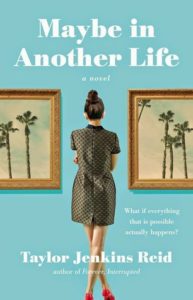 Maybe in Another Life by Taylor Jenkins Reid

You may recognize Taylor Jenkins Reid as the author of the explosive hit Daisy Jones and the Six, but she’s also written several other books, all of which I’ve enjoyed. At the age of twenty-nine, Hannah Martin still has no idea what she wants to do with her life. She has lived in six different cities and held countless meaningless jobs since graduating college. On the heels of leaving yet another city, Hannah moves back to her hometown of Los Angeles and takes up residence in her best friend Gabby’s guestroom. Shortly after getting back to town, Hannah goes out to a bar one night with Gabby and meets up with her high school boyfriend, Ethan. Just after midnight, Gabby asks Hannah if she’s ready to go, but Ethan also tells her he’d give her a ride home later if she’d like to stay. Hannah hesitates… What happens if she leaves with Gabby? What would happen if she leaves with Ethan later? In concurrent storylines, Hannah lives out the consequences of each choice. These parallel universes are told in alternating chapters and they quickly develop into their own worlds. While the premise sounds confusing, I didn’t find the chapter switches between the two alternate realities to be too jarring and you easily get immersed in Hannah’s dual lives. I loved the exploration of how our choices can impact our lives and I definitely found myself “what if…?” after making decisions in my own life. 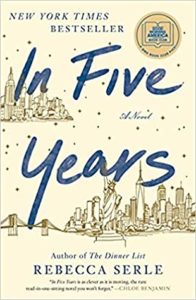 In Five Years by Rebecca Serle

Dannie is a planner. Everything in her life is meticulously mapped out—the job she wants at the law firm she wants, her dream apartment in NYC, when she and her boyfriend will get engaged and married. That’s the way she’s always been. She and her boyfriend David get engaged the night she interviews for her dream job at a highly prestigious law firm. Everything seems right. She and David have the same vision for their future, they like the same things, they’re comfortable in their routines as a couple. When Dannie and David get home that evening, Dannie falls asleep happy with the way her life is going. But when she awakens, she’s suddenly in a different apartment, with a different ring on her finger, and beside a very different man who ignites passion inside her that she’s never felt before with David. Dannie spends one hour exactly five years in the future before she wakes again in her own home on the brink of midnight, but it is one hour she cannot shake. Is she fated to have a drastically different life in five years? Four and a half years later, Dannie meets the man who appeared in her dream – he’s her best friend Bella’s boyfriend. In Five Years is a story about love and the relationships we form with others and the impacts they have on our lives, but maybe not in the way you’re expecting.