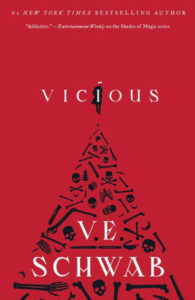 “There are no good men in this game.”

If Victoria Schwab’s raw and ruthless novel Vicious had a movie poster, this quote would be on it. This whiplash thriller is definitely the sort of novel that puts its hooks into you from page one, and doesn’t let go until well after the last page has been turned.

Basically this is a novel about anti-heroes, a cat and mouse tale about two former friends turned deadly enemies, and their struggle to outwit, outmaneuver, and perhaps even out-murder each other. Eli Ever and Victor Vale are both college students when they develop an obsession with studying individuals who have had traumatic near-death experiences and have gone on to develop ExtraOrdinary powers (or EOs for short). Being young, a bit naïve, and also slightly sociopathic, they form a pact to try to develop such powers themselves. This means simulating near-death experiences, and then pulling each other back from the brink at the last possible second.

This goes about as well as one could expect, which is to say terribly. They both gain abilities, but at a terrible cost, one which fuels a deadly vendetta between the two of them. This vendetta ultimately sends Victor to jail for a serious crime, where he quickly uses his newfound powers to begin to survive, thrive, and recruit new allies. At the same time, Eli begins to realize the messianic vision he has had of eradicating all other EOs (aka people with powers) with deadly and deliberate force. When Victor is released from jail the true action begins as both men begin to plot against each other, and the plot picks up speed with the force of a freight train.

I will try to keep things interesting here and not reveal what their powers are or who their allies turn out to be, but suffice it to say, both the powers themselves as well as the secondary cast are pretty freaking amazing. I am a huge fan of the X-Men comic book franchise, and I was originally drawn into reading this story by the description of it as being similar to the storyline for Professor X and Magneto. But the thing is, even though he makes mistakes and can sometimes be a controversial figure, Professor X is ultimately meant to be read as a hero. He advocates for things like showing mercy to your enemies and for values like justice and compassion. But in Vicious, both of the main protagonists are utterly irredeemable, and unconcerned with showing any sort of restraint. They are self-centered, narcissistic, and (as I said before) a bit on the sociopathic side.

But this lack of moral grounding only heightens the tension in the novel, as Eli and Victor both try to outdo the other in the wildest of possible ways. Free from the restrictions of conscience, ethics, and even common decency, they are both free to move across the board in any sort of direction, and boy do they ever. I will also say that as someone who loves comics, it is quite difficult to surprise me, or even to make me say, “hey, there’s a cool power that I never thought of before.” But the power that Victor gains after his brush with death is truly a unique and stunning ability that has pretty much endless possibilities, and it truly excited me to read about a power that I hadn’t previously considered.

Schwab is an author who is probably best known for her Shades of Magic series. But this is the first novel of hers that truly blew me away, and it is definitely not one that you should miss. I actually found myself wondering a few times just when – not if, when – this book will be adapted into a movie. It is quite cinematic, and with the recent dramatic conclusion of the Marvel movies, there is a void there that is crying out to be filled by a new franchise. And this epic story could definitely be it.

In summation: If you love thrillers, cat and mouse chases, ruthless and relentless action, or characters so irredeemable that Hannibal Lector might find them a bit iffy, then this is the book for you. Definitely not a superhero story in the classic sense, but super satisfying nonetheless. And hey – there’s a sequel! So if you never want it to end, you can just head to your local library to check out the next one.