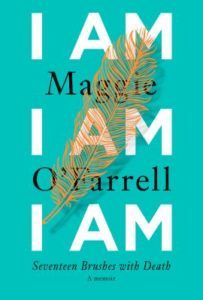 So far this year I’ve read two memoirs that, in my estimation, earned five stars, the highest rating on Goodreads. Both are extremely well written, inspiring, and, coincidentally, chronicle many brushes with death.

The first is, I Am, I Am, I am: 17 Brushes with Death by Maggie O’Farrell. The title is taken from a story by Virginia Woolf and it speaks to what O’Farrell emphasizes in  the essays–they are a celebration of not dying. A survivor of childhood encephalitis, the illness was her first close call and caused another because of the lingering effects of the disease. O’Farrell lost her sense of relation to her body in space, and, so, finding herself in deep water, she couldn’t discern which way was up and nearly drowned before a friend pulled her out. In one of the most chilling essays, she describes a time when she was walking in a secluded wood when she stumbled upon a disheveled stranger, her intuition told her she was not safe, but that she shouldn’t let on that she was frightened. She talked to him in a friendly was as he put his binocular strap around her throat. She was able to give the strap back to him and continued on her way. A week later a young woman was found raped and strangled by a binocular strap in the same area. The essays are all fascinating and run the gambit from surviving a careening airplane, a thief’s machete, a circus knife thrower, and a high risk birth, among others. The last essay is about O’Farrell’s daughter who has many life-threatening allergies, so that the family is hyper vigilant and still she lands in the emergency room about 12 times a year. The book ends with this essay and the words, “She is, she is, she is,” a fitting coda to a remarkable book.

The brushes with death in Tara Westover’s memoir, Educated involve herself and family members as victims of her father’s recklessness and mania. Westover grew up in the shadow of a mountain in rural Idaho, the daughter of survivalist who practiced his own brand of extreme Mormonism. 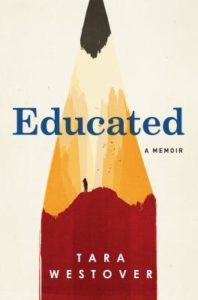 Tara and her six brothers were mostly home-schooled as in, they learned what they could teach themselves after the day’s work serving on their father’s construction crew scrapping metal, removing gas tanks, or riding on a palette balanced atop a forklift. Westover chronicles her childhood matter-of-factly. Her journey to recognizing the danger she was exposed to and the physical abuse by her unpredictable brother are difficult to read. The many accidents the family endured with only the herbal remedies prescribed by their midwife mother are astounding. Westover’s early years are epitomized by one of the family’s adventures–driving home through the night from Arizona, her brother who is driving falls asleep and the car ambles through fields, hits a few poles, and settles in a ditch with a power line draped over it. Westover’s mother suffers a brain injury, left untreated except by her herbs. The obstacles Westover overcomes to get to college begin with her lack of a birth certificate and disagreement over her exact date of birth.  The fact that she finally earns a PhD seems miraculous, especially as she fights the internalized voices of her family about her rightful place and her sinful choices.

2 comments on “Because I Could Not Stop for Death”