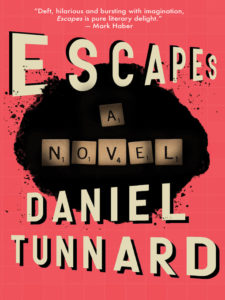 A short history lesson: poker began to be televised in the late 1990s. What was once a card game played in casinos and at family card tables was now a television sensation. Thanks to the “hole cam”, viewers at home could see each player’s hand and watch as master card players strategize and bluff their way to superstardom and win lots of money. By the end of the 2000s, poker was aired weekly on ESPN and had a large following.

Now, imagine an alternate history in which Scrabble is the sport that gets televised and becomes popular in the early-to-mid-90s. Viewers can see a player’s rack of letters through a special camera and try to guess which word players will play next. Indeed, Scrabble en Español, Scrabble played with Spanish words and their endless conjugations, is what becomes the newest sports sensation.

Can you see it? Now imagine that the sport is rigged, run by a triplet of aristocratic, elderly Argentine women who control the “Scrafia” (get it?). From their huge black blimp flying menacingly above every tournament, they bribe and intimidate everyone to ensure Scrabble remains a popular and profitable made-for-tv sport. It is this world in which Daniel Tunnard’s ESCAPEs takes place.

ESCAPEs is told from the perspective of two former Scrabble World Champions, an intense former dictionary editor from England, Florence Satine, and the suave Argentine Scrabble savant, Buenaventura Escobar. They explain in alternating chapters how they got into scrabble, how they learned about the Scrafia and its influence, and how they fell into and (very much) out of love. The novel begins with Florence describing how she and Buena finally defied the Scrafia and fled to the jungle in northern Argentina to hide out and play Scrabble, hoping that a blimp-shaped shadow does not find them and drop assassins on their heads.

I love the plot hook, but if that’s not enough for you to check this out I would also say this novel is uniquely designed. Scrabble boards are laid out in almost every chapter as Florence and Buena explain Scrabble strategy and recreate notable games. The letter pieces are recreated in the text as well, complete with the point total for each piece, and each chapter ends with Florence or Buena placing a new word on a Scrabble board to encapsulate the feel of the chapter. ESCAPEs is also a bilingual story. The book is written in English but a few words and phrases are written in Spanish to add another layer to the storytelling. You don’t need to translate anything if you don’t want to, but some of the jokes are funny. There’s no other book quite like this one out there—you should read this before the Scrafia gets you too!

ESCAPEs is available to be placed on hold at the Lee Road branch. It’s not available yet on Overdrive, but it could be. Log on and join me in recommending they get it.