We got a new online catalog!  Wow-wee!  It’s pretty amazing, I gotta tell ya.  Remember when you used to have to hold fire near a slice of bread in order to make toast, and then they invented the toaster.  And you thought, geez, this is so much easier and now I can really enjoy toast because I don’t almost die making it?  Well, the new catalog is much the same to me.  The old one was very persnickety about finding items, and this new one is “bang!zoom! is this what you wanted?”  I love it.  It requires you to create a username when you sign up (but you can change it later) so that no one sees your library card number, and after that, it’s like the goodreads fairy came down and gave our old catalog a big hug, imbuing it with the capability to create to-read lists, shelves, add reviews, and oh-s0-much-more.  Give it a whirl! 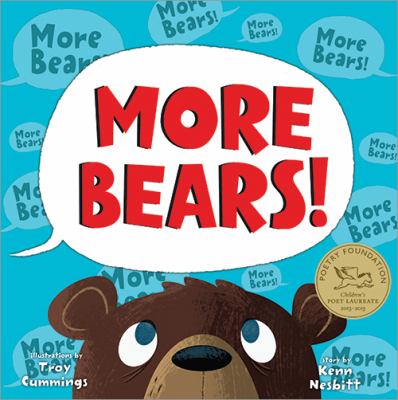 Now, to books!  This week’s cart held some quirky, interactive, fun selections.  First is More Bears! The author has a story to tell you.  This story has absolutely no bears in it.  But it did have…what did you say?  More bears?  No, no, no.  No bears.  But if you keep insisting, the author might just relent and put in a bear.  But just one…unless you keep insisting, and then you might see more bears.  Bears like a bear named Uncle Sheldon who plays the ukulele and Excellent Steve, a bear who just wants to surf.   Once kids see that shouting MORE BEARS! will result in just what they want, it’ll be hard to stem the tide. I’m not sure if this is Kenn Nesbitt’s first book since the end papers incessantly call for more bears instead of giving author information, but he seems pretty funny.  Try this one out. 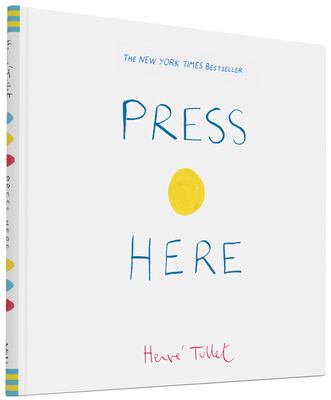 Shouting is fun, but you can push buttons a different way when you “read” Press Here by Herve Tullet .  The title gives you the right idea, just press here.  Push that yellow button, right on the page, then turn the page to see what happens.  WoahÂ  You just made a dot appear!  What if you push it again?  Watch this awesome book trailer and see for yourself.

I’m all for new and interesting format for books, from Playaway views (which we also just got!) to iPad techno-delights, but there is just nothing that can compare to a book with pages you just can’t wait to turn because you just have to know what happens next.

Another book that will last long after reading is Perfect Square, which is not a how-to on becoming a nerd.  The exact opposite, in fact. 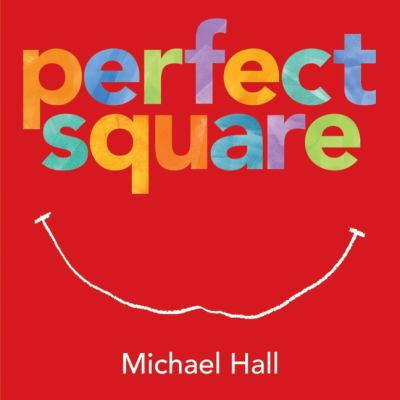 Origami books have been flying off the shelves lately and the little red square, content in its perfect red squareness on Sunday, gets a terrific shock when it was cut into pieces and poked full of holes on Monday!  The square pulls itself together, but in the shape of a bubbly fountain.  The week doesn’t get better from there, although the square does its best to reform itself into something beautiful each time.  Its ripped pieces become flowers, crumpled wads become mountains.  Not that I wasn’t antsy before this book, but now no cocktail napkin safe from a transformation at my hands. As you can see for yourself in the graceful booktrailer, this is a celebration of imperfection.