I first came across Diary of a Wimpy Kid in a Philip Morris column a long time ago.  I thought any book that the sagacious Mr. Morris doesn’t get has got be worth a look.  It is. I also offer this column as proof that this book, despite appearances to the contrary, is not ‘for boys only’.

This book is the opposite of unreadable, which makes it 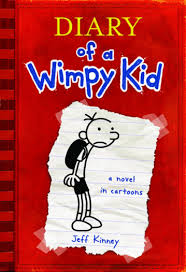 perfect for the intended audience of reluctant 12-14 year old boy readers.  The book is the JOURNAL (not the diary as the title would lead you to think) of middle schooler Greg Huffley.  And it’s a journal because boys don’t keep diaries because if anyone found out that a boy kept a diary, this boy would face the merciless ridicule of older middle school boys (this is all covered on page 1).  The journal is full of drawn scenes which are really funny all by themselves, too.

Always hilarious, sometimes embarassing, sometimes gross stuff happens every day to Greg.  It made me think of what David Sedaris might have been like in middle school.  Like when Greg joins the safety patrol because not only does it grant him hot chocolate privileges (which means he can come to first period ten minutes late), it lets him miss 20 minutes of pre-algebra when he has to walk the kindergartners home.  He thought that on one day a kid had an accident in his pants ’cause it started to smell real bad, but when the kid tried to let Greg know, he “stared straight ahead because I certainly didn’t sign up for diaper duty.”

Or when his class had to do an experimental group project, Greg was mad when the mean kid was in his group because he wouldn’t do any work.  They decided to make a robot and after decided what the robot should do, which required splitting off from the girls who wanted the robot to dispense lip gloss, they had to program its speech.  But since the robot shouldn’t swear, they had to make a list of words the robot shouldn’t say, which of course was how the mean kid ended up being the biggest contributor.  Group projects were discontinued after that.

This book is the next step up from the esteemed likes of Captain Underpants and on par with Carl Hiaasen (humor-wise; Hiaasen is quite a bit more literary).  Apparently, it started out as a webcomic on www.funbrain.com where I’m sure it had plenty of competition for attention.  I know this book has been out since 2007, the sequel Rodrick Rules just came out, and the third is right around the corner.

2 comments on “Book review: Diary of a Wimpy Kid”