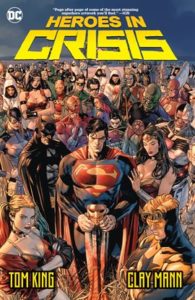 Have you ever watched a Batman movie and wondered to yourself why 90% of the characters aren’t actively seeing a therapist? Tom King’s Heroes in Crisis seeks to answer that very question in this thrilling and well-written graphic novel that is presented in the form of a murder mystery. Because of the mental health issues that often arise in superheroes in the DC Universe, a retreat is created to try to help them resolve these predicaments in a peaceful and healthy way. The retreat is called Sanctuary, and it offers superheroes a place to rest and explore their moral and personal dilemmas in an anonymous and judgment-free space. There are even robot mental health counselors who use virtual simulations to help their clients process their trauma through confronting painful failures and situations from their past.

All of these things sound like helpful measures for super heroes, who often have to face issues like watching their friends die in the line of duty, and many of whom struggle with feelings of guilt and shame over those people they were unable to save. Many of them have even developed issues like PTSD, suicidal ideation, or drug addiction because of these experiences and their inability to process or make sense of the violent events that they are exposed to on a regular basis. However, because this is a comic book universe, complication are bound to arise to move the plot along and to heighten the drama of an already tense situation.

This happens when the superheroes respond to alarms at Sanctuary only to discover that all of the current residents of Sanctuary have been murdered in a fairly gruesome fashion. Two characters, Harley Quinn and Booster Gold, are immediately implicated in the murder. Both of them are of dubious background and moral character. And they both seemingly saw each other carry the gruesome act out, but still fervently maintain their innocence. DC’s Holy Trinity – Batman, Superman, and Wonder Woman – investigate these murders as best as they can while dealing with trying to simultaneously grapple with their own feelings of grief over losing so many of their friends. They also have to deal with many questions from the general public when an anonymous source starts leaking recorded videos of the therapy sessions of individual heroes to the media, who in turn begin to broadcast and share them. This becomes particularly troublesome when basic citizens begin to question whether or not they can truly trust these heroes when they begin to see just how flawed and human they are.

Please be aware, some mild spoilers follow the rest of this review, as well as discussions about police brutality and trauma that may be triggering for particular individuals:

While all of this is going on, Booster Gold and Harley Quinn evade capture and team up to conduct their own investigation, accompanied by some likely (and some not-so-likely) allies. What they uncover is a plot twist that is both as believable as it is heart-rending. This isn’t a crime that was carried out because of malice, but rather an accident caused by intense trauma and unprocessed grief, something many people carry with them throughout their lives, and which many people struggle with on a daily basis.

Because this is a mystery, I definitely don’t want to give away any more of the plot. But I have to say that the speech that Superman gives halfway through about this graphic novel actually moved me to tears. I’m an emotional person by nature, so perhaps this was just my reaction, and it would not have the same effect on another reader. However, Clark Kent’s explanation for what motivates superheroes to continue their work in the face of so much violence and trauma, his description of what they sacrifice to do so, and his elucidation on why the public should still continue to put their trust in them reminded me greatly of our current American debate over the police and issues of police brutality. Like many other great graphic novels, Heroes in Crisis speaks to our current moment with an immediacy that truly cuts to the heart of our present-day conflict. Although I’m not sure if this work was meant to be interpreted in this manner by King, the subconscious narrative about those who actively choose to face daily danger so that others don’t have to truly reminded me of so many of our civil servants – police officers, fire fighters, social workers, and others – who all put their physical and mental health at risk to serve their community.

This thought-provoking work raised many questions for me, and none of them have any easy answers. For instance, at what cost do we start to make people into symbols such as hope or safety while compromising our understanding of them as an actual human being? When we as a public see the flaws and cracks in those we put so much faith in, when we see their struggles, does that inherently make them less trust worthy, and why?

Violence, of course, is never acceptable. Police brutality is a truly serious issue, and it impacts citizens disproportionately based on their race, gender, and social class. However, reading this graphic novel made me wonder about where these individuals can find their own Sanctuary, and what sort of mental health support and training is truly available to them. Heroes in Crisis is a deft exploration of modern societal issues with wonderful artwork created by the incomparable Clay Mann and his creative team, and I would highly recommend it to anyone who is looking for a great read that provides an intense and introspective look at our current moment via the vehicle of superheroes and the DC Universe.

In conclusion, and at the risk of possible spoilers, I have to say that part of what I loved about this graphic novel was the ending. Because even though this event was largely an accident and not a deliberate act, the culpable parties are not absolved of guilt. Responsibility and accountability are emphasized, even while vital pain is acknowledged. As one of the main characters says, “More violence doesn’t solve it. We did it. We’ve got to face it.” They also discuss the virtues of listening, and realizing that we are not alone either in this world or in our the challenges that we face in this life. This is not a graphic novel that is a shut and closed case where everything is tied in up into a happy bow at the end, and where the clock is turned back to “situation normal” when the final page is turned. As a reader, you can feel that the weight of what has transpired will linger. And although the plot is concluded, the moral and ethical quandaries that were raised definitely stick with you as you return to regular life, which I believe is truly the hallmark of any great literary achievement.

As always, please remember that you can find Heroes in Crisis and other amazing graphic novels on Hoopla, where they are available to borrow and read from the comfort of your own home.

New and Trending Comics on Hoopla