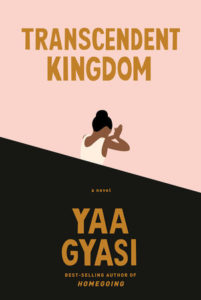 Ever since finishing Transcendent Kingdom, I have been struggling to find the right words to truly capture this brilliant jewel of a new novel. Sometimes, I honestly think it can be easier to write about a novel that you hated reading, rather than one that truly touched and moved you. Naturally it is beyond cliché to use words like “genius” to refer to an author like Yaa Gyasi, whose first novel, Homegoing, captured a great deal of much-deserved praise and accolades. The question then always becomes whether or not such an author can publish a sophomore work that is equal to their freshman effort.

With Transcendent Kingdom, Gyasi has firmly put to bed any fears that her first novel was somehow an aberration. In this novel, she tackles substantial issues such as the black immigrant experience and perceptions of the black male body in America, while also confronting the question of generational trauma and grief with a deftness that belies her deep thinking on these subjects. She also delves deeply into the question of religion v. science, and whether or not either of those disciplines is truly complete on its own. The inner conflict that her main character, Gifty, feels over her religious upbringing, and its seeming incongruence with her current role as a neuroscientist is one that will likely resonate with many readers. Gyasi also confronts the riddle of addiction in this novel, another topic that is on the mind of many Americans today. Lately it feels as if we may have developed some sort of societal amnesia about the opioid epidemic. But this novel is a stark reminder that may yet spark a much-needed conversation around how well we treat those in our communities who most need our support and understanding.

The exploration of all of these timely themes is part of what makes Transcendent Kingdom such a gift to the current literary canon. But what I think is so truly spectacular is the way that Gyasi chooses to present them. There is something truly unique about her use of language that does not hammer these heavy subjects down, but rather makes the reader feel as if someone is whispering a hidden truth to them. And just like most hidden truths, it sometimes feel as if these things have been in front of you all along, yet somehow they may have escaped your conscious notice. But they are now being revealed to you, and your subconscious is awake in a way that perhaps it was not before. And with that awareness comes the opportunity for change.

There are certain novels that go out into the world that have the power to alter the direction of a country or a generation. This particular reader thinks that Transcendent Kingdom is among them, and urges anyone who wants to seriously understand these issues to consider reading this beautiful, emotive, and at times, heart-breaking novel. And afterwards, please join the conversation around it.

Put a physical copy on hold by clicking this link.

Put the eBook on hold on Overdrive.

For further consideration, please listen to this NPR interview with Yaa Gyasi on Transcendent Kingdom, Writing Can Be ‘An Act of Love and Justice’