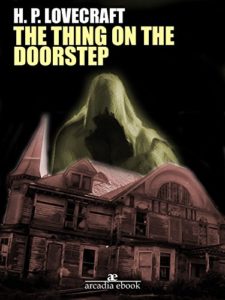 Known for their bleak tone and weird, lurking horrors, H.P. Lovecraft’s stories have been a tremendous influence on horror literature over the past century. But Lovecraft’s stories can be challenging to read because of his use of some archaic English and entirely original words and sounds.

So, as an alternative, this audiobook provides a much more accessible avenue to enjoying Lovecraft’s stories. These stories are expertly narrated, providing a vivid, convincing recital of the weirdness and horror that unfolds before, or happens to, the characters of Lovecraft’s stories. And yet the narration, impressively, never gets too overly-dramatic as these events unfold.

The Thing on the Doorstep: A tale of dark magic and body-swapping as the narrator watches his friend grow up, delve into the elder mysteries, and then descend into madness.

The Colour Out of Space: A surveyor surveys a particularly strange patch of woods. His search for an explanation leads him to speak with an old farmer who tells him about a farm that once stood there and what happened in the “strange days” after a meteorite struck the property.

The Outsider:  A man seeks a way out of the castle that he has called home for all his life. All he wants is to see the sky, and light that is not simply candlelight.

The Doom that came to Sarnath: A short history of the rise of Sarnath, the greatest city of Mnar and the lands beyond, and the eventual Doom that visited upon it.

The Festival: Feeling compelled to go home, an unnamed narrator returns to attend the secret Yuletide festival, a once-in-a-century rite where an entire town gathers to remember a more elder time.

The Rats in the Walls: Mr. de la Poer purchases and restores a mansion that once belonged to his ancestors in England after the death of his son, ignoring the “peasant superstitions” surrounding the place. (Note: de la Poer owns a black cat named N****r Man, who figures prominently in this story. The reader does not shy away from using the n-word in this story.)

Some other Lovecraftian horror stories to consider reading (or listening to):

Edgar Allan Poe: The Fall of the House of Usher (within a collection of his work)