If you’re looking for an engrossing family drama read, look no further than Christina Clancy’s debut novel, The Second Home. The messed-up family dynamics will totally draw you in, and you’ll be dying to reach the resolution the entire time you’re reading. 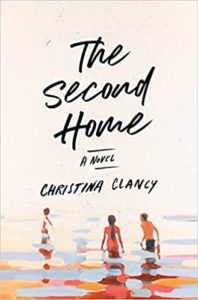 The story begins when the Gordon daughters, Ann and Poppy, are in high school. Ann’s friend from school, Michael, has moved in with them because he has no other place to go. The Gordon parents are teachers, partly because they’re passionate about academia and partly because they love having the summers free to visit their second home, an almost-falling-apart family vacation home on Cape Cod. The summer before Ann and Michael’s senior year, their safe and comfortable family life begins to fall apart.

I enjoy how the house and the Cape Cod setting function in the plot. I believed in Ann and Michael and Poppy implicitly, and all of their journeys were realistic. The story is told in third person, in alternating points of view, from the three high school students. We see the three of them both as teens and as adults as the story progresses. I wasn’t sure, at the beginning, if I would like this or not; the people in the family are troubled in lots of troubling ways. But I really cared about what would happen to them, and I found the ending deeply satisfying.

This would be a great book club book. If you like books where family drama drives the plot, try these:

The Precious One by Marisa de los Santos

Every Last One by Anna Quindlen

The Three Weissmans of Westport by Cathleen Schine