Here are two books I recently enjoyed, one by Jean Kwok and one by Cathleen Schine. These two authors have each written several books, so if you, like me, enjoy an author’s work and want more by that author, you will have that opportunity here! They’re both contemporary fiction, and they’re both set in New York City, but there the similarities end.

The first one is The Grammarians by Cathleen Schine (ebook here). I have read a few of her books, and I tend to look for her new ones when they come out. I enjoy her writing because it’s clever, and so are her characters. This one is about twin girls, Daphne and Laurel (classics pun!) and how entwined they are as they grow up and how they handle the rifts that come with growing older. The girls are obsessed with words and language; they have a private language as children and one of their favorite pastimes is hunting down words in one of those huge dictionaries that rests on its 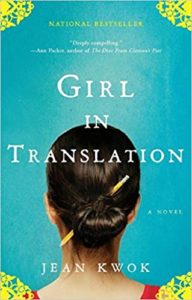 own stand. Their careers reflect this, but as adults, words and language drive them apart instead of bringing them together. I laughed out loud as I read this. So clever and such unforgettable characters.

The second book is Girl in Translation by Jean Kwok (ebook here). I had never read a book by Jean Kwok before, but I’m certainly planning on reading more of them now. She’s a thoughtful, insightful writer. This book is told in the first person from the viewpoint of Kimberly Chang, who arrives from Hong Kong at age eleven, with her mother. Kimberly introduces herself by letting us know that she has a talent for schoolwork, and watching her overcome the language barrier so she may truly shine as an American student is a fascinating journey. Kimberly and her mother both struggle with poverty and hard work as new immigrants, and their story is both painful and uplifting. Kimberly grows into a strong student and a strong young woman, who learns to make her own sometimes surprising choices.

More by these authors:

Mambo in Chinatown by Jean Kwok

They May Not Mean To, But They Do by Cathleen Schine

Fin and Lady by Cathleen Schine