October and fall weather always gets me in the mood to curl up under a blanket with a creepy book. I don’t really get much into horror, but I do like to read books with some slight supernatural elements. You won’t find any Stephen King on my to read list, but I hope you’ll enjoy these creepy thrillers as much as I did. 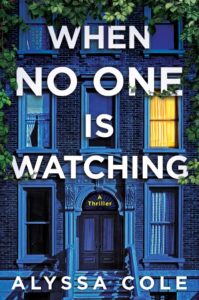 When No One Is Watching by Alyssa Cole

Sydney Green is Brooklyn born and raised, but her beloved neighborhood seems to change every time she blinks. Condos are sprouting like weeds, FOR SALE signs are popping up overnight, and the neighbors she’s known all her life are disappearing. To hold onto her community’s past and present, Sydney channels her frustration into a walking tour and finds an unlikely and unwanted assistant in one of the new arrivals to the block—her neighbor Theo. But Sydney and Theo’s deep dive into history quickly becomes a dizzying descent into paranoia and fear that seems to be tied to the new medical facility that’s moving into the neighborhood. When does coincidence become conspiracy? Where do people go when gentrification pushes them out? Can Sydney and Theo trust each other—or themselves—long enough to find out before they too disappear? When No One Is Watching builds tension throughout the novel, and I was racing through the final chapters to find out just what was going on. There’s definitely more to this book than what it seems at the beginning! 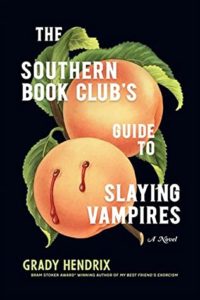 If you liked the movie Fright Night and wondered what would happen if a mom thought the new neighbor was a vampire, then this book is for you! It’s the mid-90s and Patricia Campbell is your typical housewife: The days are long, her kids are ungrateful, her husband is distant, and her to-do list is never really done. The one thing she has to look forward to is her book club, a group of  mothers united only by their love for true-crime and suspenseful fiction. But when an artistic and sensitive stranger moves into the neighborhood, the book club’s meetings turn into speculation about the newcomer. Patricia is initially attracted to him, but when some local children go missing, she starts to suspect the newcomer is involved. She begins her own investigation, assuming that he’s a Jeffrey Dahmer or Ted Bundy. What she uncovers is far more terrifying, and soon she–and her book club–are the only people standing between the monster they’ve invited into their homes and their unsuspecting community. Grady Hendrix infuses humor along side his horror, and if you like this one, I also recommend Horrorstor (set in Cleveland!) and My Best Friend’s Exorcism. 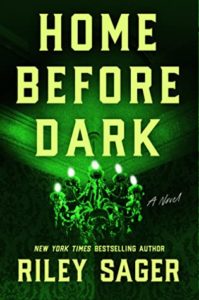 Home Before Dark by Riley Sager

Have you binged The Haunting of Hill House and The Haunting of Bly Manor on Netflix and are looking for a book with a similar vibe? Home Before Dark might just be the book for you. Twenty-five years ago, Maggie and her parents, Ewan and Jess, moved into Baneberry Hall, a rambling Victorian estate in the Vermont woods. They spent three weeks there before fleeing in the dead of night, an ordeal Ewan later recounted in a nonfiction book called House of Horrors. His tale of ghostly happenings and encounters with malevolent spirits became a worldwide phenomenon, rivaling The Amityville Horror in popularity—and skepticism. Today, Maggie is a restorer of old homes and too young to remember any of the events mentioned in her father’s book. But she also doesn’t believe a word of it. Ghosts, after all, don’t exist. When Maggie inherits Baneberry Hall after her father’s death, she returns to renovate the place to prepare it for sale. But her homecoming is anything but warm. People from the past, chronicled in House of Horrors, lurk in the shadows. And locals aren’t thrilled that their small town has been made infamous thanks to Maggie’s father. Even more unnerving is Baneberry Hall itself—a place filled with relics from another era that hint at a history of dark deeds. As Maggie experiences strange occurrences straight out of her father’s book, she starts to believe that what he wrote was more fact than fiction. Excerpts from Maggie’s father’s book are interspersed between current happenings, which I found to be a unique form of storytelling. It allows the reader to decide for themselves if the events that took place at Baneberry Hall really happened or not.