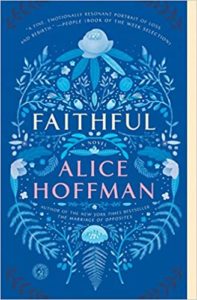 If you missed reading the Third Tuesday Book Club’s March 2020 selection, Alice Hoffman’s novel Faithful,  (audiobook here) you may find time now to read it. Eighteen year old high school senior, Shelby Richmond, while driving a car on an icy November night near her home on route 110 in Long Island, gets into a horrific crash. Her passenger and best friend, Helene, is seriously injured and falls into a coma from which she can’t be awakened. While Shelby is only slightly injured physically, psychologically she is devastated to the point where she barely talks to anyone. After spending some time in a mental hospital, then living silently in her parents’ basement, Shelby is pulled out of her silent world by classmate, Ben, and moves with him to New York City.

Slowly and painfully Shelby’s life moves forward as she finds a job in a pet shop, adopts, first one, then a couple more dogs, and begins to interact with co-worker Maravelle and her three children. None of these developments happen quickly. Shelby’s character and personality develop and grow over a span of several years as she faces the ups and downs of everyday life and learns to cope with her feelings about herself, the accident and her friends debilitating state.

While not full of action, the book is a fast read. Once begun, it is hard to put down. It may take a while to get to know Shelby, but she becomes a person who you want to succeed. The book also has likable supporting characters, like Maravelle and Shelby’s mother.