Travel across the pond, go back about a century, and enter the world of Nancy Mitford. In two of her novels, featuring the fictional Radletts and Hamptons, Mitford portrays the lives of the British aristocracy in the years between the World Wars, and revels in the eccentricities, flaws, and frivolities that make these novels into truly engaging comedies of manners. Both books have the same narrator, Fanny, who is a cousin of the Radletts and  a frequent visitor in the Radlett and Hampton families. I enjoy Fanny’s wry, affectionate voice and the effervescent dialogue in both stories.

The first book, The Pursuit of Love, begins when Fanny is a child visiting at Alconleigh, the Radletts’ country house. This is the story of Fanny’s best friend Linda, the second of seven Radlett 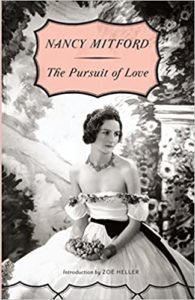 children, whose intense character and romantic outlook lead her into one relationship disaster after another. As children, Fanny and Linda take every opportunity they can to help and nurture the animals in the house and on the estate. They belong to a secret club, called the Hons, that meets in an upstairs cupboard and features fierce discussions on topics such as what Oscar Wilde did that was really so dreadful. As teens, the girls watch the eldest sister, Louisa, come out into society and yearn for the day when it will be their turn. Then, when the girls are debutantes with the attending balls and glitter, Linda determines her own fate, which leads to ups and downs that could only belong to her. (ebook here)

The companion book, Love in a Cold Climate, is the story of Polly Hampton, whose most remarkable features are her unmatched beauty and her air of detachment in regard to her debut. Polly’s mother, Lady Sonia Montdore, is determined that her daughter should marry well, but her plans hit a snag when Polly demonstrates absolutely no interest in any of the young men she meets. Even Fanny, a frequent visitor at Hampton and Polly’s closest friend, is not taken into her confidence. Later in the story, it is revealed that Polly has had hopes and dreams of her own the whole time, and she doesn’t hesitate to act when events unfold that make her wildest dreams turn into possibilities. Polly’s cousin Cedric, who is in line to inherit all the entailed property in the family, deserves special mention as a flamboyant manipulator who as he himself says, succeeds in having his cake and eating it too. (ebook here)

I adore reading about the Radletts and the Hamptons and I especially love the well-paced, distinctive dialogue of the girls. The energy and high spirits of the Radlett girls call the willing reader into their world of fox hunts, debutante balls, and the bittersweet trials of growing up. I can, and do, read Nancy Mitford’s books again and again.

More books by the Mitford sisters:

Daughters and Rebels: the Autobiography of Jessica Mitford

The Blessing a novel by Nancy Mitford