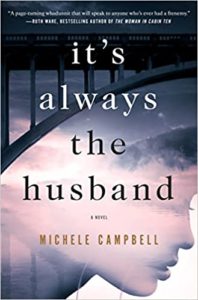 The publishing industry knows when they have a good hook, and, these days, narcissists, psychopaths, sociopaths and unreliable narrators are still pulling in the money. The Gone, Girl and Girl on the Train phenomena continues. A number of books from this past year have been billed as the ‘best new thing’ in that genre.  A few are better than others, to be sure, but the following titles will have you happily turning the pages in the dead of night considering what may unfold on the next page.

It’s Always the Husband by Michele Campbell
Three college roommates, a rich one, a poor one, and a sensible one reunite decades after a tragedy fractured their college lives sending one of them away from school forever. One ends up dead. Which one and why? Did she jump or was she pushed? There are a number of unlikable characters who could be responsible, but, still, the ending was a surprise, so, well done!

The Girl Before by J.P, Delaney
Optioned by Ron Howard for film, this fast paced thriller follows the ‘then and now’ down on their luck girls who had the opportunity to live in a ‘state of the art’ house built by a talented London architect who is very discriminating about whom he allows to live in his creation. When the now girl tries to find what happened to the then girl, her life begins to fall apart and she becomes a prisoner in the house.

Lie To Me by J.T. Ellison
This tension filled, compulsively readable page turner features a couple who seem to have it all; love, money, happiness, success and good looks. Both are successful authors; the husband, a  critically acclaimed literary fiction writer and the wife, a fantasy and historical romance novelist. Told through their varying viewpoints, you soon find they are unreliable narrators and their relationship is not as it first appears. The wacky ending has people talking.

Unraveling Oliver by Liz Nugent
From page one the reader will realize that something is a bit off with the charismatic Oliver.  Is he actually  a sociopath? What made him that way and what has he done? In chilling, unadorned prose, all is revealed.

Fierce Kingdom by Gin Phillips
What will a mother endure to protect her son and herself when a calm afternoon at the zoo is turned into a terror filled day by gunmen on the loose? An action filled but moving story of maternal love.

Behind Her Eyes by Sarah Pinborough
Louise, a single mom, meets David at a bar and there is instant attraction. The next morning she discovers he is her new boss and married to the beautiful, ethereal Adele. Adele and Louise become fast friends and therein lies the problem. You most likely won’t see the odd and unexpected ending coming.

The Best Day Ever by Kaira Rouda
Taking his beautiful wife to their Lake Erie summerhouse for a romantic weekend may not be exactly what the psychopath husband has in mind. What does he have in store for her, or, should we ask, what does she have in store for him? Quick reading suspense about supposedly normal people!

Emma in the Night by Wendy Walker
Two sisters disappear suddenly. Years later one returns with such a far-fetched story of what happened that it seems unbelievable. Could the answers to the sisters’ disappearance be rooted in their dysfunctional family?