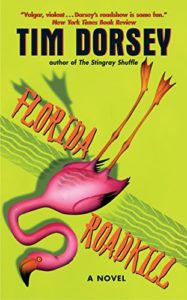 Set in and around the Sunshine State, Florida Roadkill by Tim Dorsey is a fast-paced, darkly comic mystery/thriller which simply asks you to start reading and hang on for the ride. I’ve had a difficult time trying to figure out how to explain this novel’s plot, so here is what I’ll say about it: a $5 million briefcase has been accidentally picked up by two men who are on a fishing trip, a briefcase which various psychopaths, drug addicts, criminals, and a satanic death metal band are all looking for. Unfortunately, that’s the best I can do. Florida Roadkill is very much a moment-to-moment story, any attempt to explain further could not do the story justice. For example, there is an uproarious scene with the death metal band’s singer and a bus full of evangelical Promise Keepers, but outside of the obvious antagonism between them the lead up to the moment is what makes this novel so fun to read. It’s something to experience.

The story follows a number of different characters, but the action mainly follows three of them. There’s Sharon Rhodes, a stripper who, through a combination of looks, smarts, and cocaine, gets close to rich men and then kills them for the life insurance money (did you know you could kill a man just by helping him put on his pants?). Then there’s Coleman, a man who uses a different drug for each day of the week to avoid getting “hooked” on a particular one (Thursday is for cocaine). And then there’s Serge A. Storms. Charming, intelligent, and an excellent tour guide, Serge is a Florida history and trivia buff who also happens to be, while not on his meds, an unrepentant psychopath who will kill anyone who fails to meet his unique sense of justice, typically in spectacularly inventive fashion (i.e. using a rocket ship to fire a shotgun). These three serve as interesting foils to each other and often foil each other’s plans and schemes, whether they mean to or not, as they roam Florida seeing the sites and looking for the $5 million.

Like Carl Hiaasen and Dave Barry, Tim Dorsey’s stories provide non-Floridians a humorous look into the (apparently) manic nature of their home state. Better yet, Dorsey provides several windows into the nature of Florida and its wonders. Florida Roadkill is the first book of a 22 book series, which you do not need to read in order, with all except one centered on Serge Storms. It’s a series I have dipped in and out of from time to time, and each return is as memorable and funny as the last. If you like action-packed mysteries, I cannot recommend this series enough.