It’s intriguing to me when a big batch of new books comes in and several books center on the same, sometimes obscure, subject.  I personally love when coincidences pop up and give you the suggestion that something else is happening outside of what is readily apparent.  I mean, what is going on in the world that caused two completely separate teams of authors, illustrators and publishers to produce books about merry-go-rounds?  If I had to guess, I might say just-in-time-for-summer books are emerging, or that maybe everyone noticed the lack of merry-go-round books at the same time.  Thinking about this stuff can be a merry-go-round itself.  Well, onto the books! 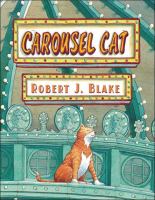 First is Carousel Cat by Robert Blake.  To be fair, this book is more about the cat.  The first page even says “I want to tell you a story about a cat.”  But still, a huge indoor carousel is involved.  It counts.  The whole story is set at an amusement boardwalk with cozy little vacation attractions and souvenier booths, sideshows like the fortune teller and the World’s Strongest Tatooed Man. The sort of scene where cotton candy, at least once upon a time, abounded and music mixed with the smells from Taffyland and the Char-Broil diner around the Pavilion O’ Fun.Â Until the new super duper amusement park opened and took all the business.  Now the only ones left were Dan the owner, some performers, and the cat.  When disaster comes to the old Pavilion, the cat’s secret is revealed in a heart stopping scene of danger and joy.

Reserve a copy of Carousel Cat 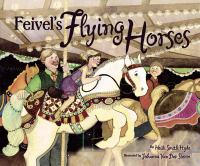 In Feivel’s Flying Horses, a hard working Jewish woodcarver who immigrates to New York trying to raise money to bring his family over.  His work carving items for Jewish temples is rewarding, but a visit to Coney Island gives him a glimpse of the captivating wooden horses of the carousel. Lucky that there should be an opening for a experienced wood carver!  Feivel applies and gets a job where he carves horses inspired by the family he loves so much.  The art has a cartoony, old-timey feeling, putting you right in the middle of a fond memory of hot dogs and popcorn on the Coney Island boardwark.

One comment on “Flying horses and dragons and lions. And hot dogs”