Do you ever look at your To-Be-Read List and see things that have been on there for YEARS but you just can’t bring yourself to read them right now? You still really want to read them though so you leave them on there… and every few months you look at it and think about taking it off your to read list but ultimately leave it there “for a little while longer”? Just me then? Here are some books that have been lingering on my To Read List for a while that I will get to soon – someday – maybe.

The Lion, the Witch, and the Wardrobe by C.S. Lewis has been on my to read list since 2013, normally I love to read fantasy and magic so one would think I had already read this book long ago. However, the more popular a book is and the more people recommend a book to me, the less likely I am to read it. So even though it has been out for almost 70 years (first printed in 1950) it has become so widespread that almost everyone recommends it to me. Nearly a decade ago I read the chronological first book in the series The Magician’s Nephew, even though it was published after The Lion, the Witch, and the Wardrobe. I did enjoy it but it didn’t have me desperate to read the next book in the series. Did you read this book as a child, teen, or as an adult? What led you to picking it up?

Next, Great Expectations by Charles Dickens, I bet most of you thought this post was going to be nothing but “classics” but this is the only one I am going to write about today. Now don’t get me wrong, I really enjoy Charles Dickens’ writing! A Tale of Two Cities and A Christmas Carol are books that I really enjoyed and I would even go as far as to say that A Tale of Two Cities is one of my favorite books. However, no matter how often I think about picking this up and finally crossing it off my list (on since 2013) I just haven’t been able too. The main character, Pip, an orphan who seems doomed to work forever in a dirty, smelly forge dreams of one day becoming a gentleman (don’t we all aspire to a better life?) and through a series of trials and tribulations finds himself in possession of “great expectations”. Were you made to read this in school? Did you end up liking it anyways (that’s how I read A Tale of Two Cities)? Revisiting books you were assigned to read in school can be an eye opener five or ten years down the line when your tastes have matured.

The Angel’s Game by Carlos Ruiz Zafon, this book is actually the second in a series and has been on my to-read list since 2014. I read the first one, The Shadow of the Wind, at least eight years ago if not longer. I really liked it! I remember it being lyrical writing and pretty different from anything else I had read before. I see the second, third, and fourth books occasionally on the shelf and think that I should finish the series. However, it has been so long since I read the first book I would have to go back and re-read that one before reading the others and that just seems like a lot of work each time I think about it. So I tell myself that I will get to them in the future, really I will! So, if you are looking for a new series to read, this one set in Barcelona in 1945, might be the one for you! 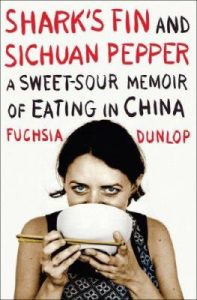 Lastly, Shark’s Fin and Sichaun Pepper: A Sweet-Sour Memoir of Eating in China by Fuchsia Dunlop, I LOVE food memoirs (I know, I know everyone does) and I have read quite a few. There’s something always interesting about them and there are often quite a few yummy recipes included in between the pages but this one has been sitting on my to-read shelf since 2014. On Goodreads it has an average rating of 3.98 out of 5 so I know that the writing must be pretty good, maybe I am worried that reading it will make me too hungry? That always seems to happen to me! Whatever the case may be, if you’re hungry for a good food memoir, give this one a try!

There are plenty of amazing books out there that for whatever reason linger on people’s to-read lists, I have plenty more on mine but these four are the ones that stood out to me when I sat down to write this post. Are there books that have been on your list for a long time? What are some of the reasons that they are sitting there? Not only was this blog post interesting to write because it got to revisit my past self’s interests, but it also made me think about why I hadn’t picked these up yet. Writing this has made me want to move Shark’s Fin and Sichuan Pepper further up my list because reading about yummy food as sleet falls outside and I can just order food to my house if I want to seems pretty amazing! Thanks for coming on this travel through time with me and hopefully this encourages you to pick up a book you just haven’t gotten to yet!