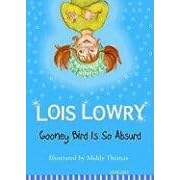 Lois Lowry’s Gooney Bird Greene is back in Gooney Bird Is So Absurd. It’s now January in Mrs. Pidgeon’s second grade class. The students are studying and writing poetry. This inspires Gooney Bird to come to school with a special brainwarming hat. Gooney Bird  calls it her “two-ponytail hat. Others recognize it as  green ruffled underpants worn upside down.  But since the class has long ago realized that saying the word underpants is a cheap laugh, they all take the high road. It’s not long before everyone is not only creating wonderful poetry, but also sporting their own brainwarming hat! Here’s a small poetic sample:

A redhead named Gooney Bird Greene
Wore a hat that was hardly routine.
We couldn’t complain,
For it warmed up her brain,
And at least it was perfectly clean.

There are lots of laughs here, as well as poignant moments. Toward the end of the book, Mrs. Pidgeon’s mother, who has been their room mother, dies.  The children, led by Gooney Bird, create the most memorable poem ever.

Those who like Junie B. Jones and Judy Mooney will cotton to Gooney Bird, too.