The Matchmakers are delighted to spotlight a post by guest blogger and Adult Reference Associate, Kate Atherton! Kate writes:

Come Again , written and drawn by Nate Powell (of the MARCH series fame), is a surreal thriller told through high contrast, expressive ink and brush drawings and muted 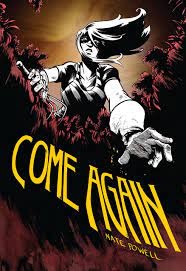 color washes. Much of Powell’s famous work and collaborations center around social justice and the civil rights movement such as March Book 1, Book 2 and Book 3 (co-written with Congressman John Lewis and Andrew Aydin) and The Silence of our Friends (co-written with Mark Long and John Demonakos) but this book, a solo effort, is very different. This graphic novel’s protagonist is Haluska, a young single mother raising her son Jake in a commune on a hill. The commune is a tight knit, small community of farmers, makers and merchants who all work together, watch each other’s kids and know each other’s business. Running through the book is an ongoing stream of poetry implying the existence of a long-kept secret. The reader soon learns that two of the community members have been having an affair for some time, meeting in a hidden bunker with a round door in the woods. When Jake, Haluska’s son, and his best friend stumble upon the bunker the graphic novel takes a complete turn from a story of domestic bliss about a mother and child into one about a dark secret and what the cost of keeping it will be.
Come Again is a perfect graphic novel selection for fans of The Twilight Zone or Black Mirror as it is a story where a seemingly normal rural setting is ruled by an unexplained supernatural force. It is also a wonderful pick for fans of horror movies like It Follows or The Babadook that center around horrific entities that represent OR are drawn to characters with psychological guilt, trauma, or emerging sexuality. Whether or not that sinister, invisible force in ‘Come Again’ is real or imagined by the protagonist, Haluska, as a representation of her growing guilt is up for the reader’s interpretation. “Can you keep a secret? Will you need to?” are the book’s haunting last words. Come Again is a quick, cinematic and thought provoking read.