We start, again, with a story. 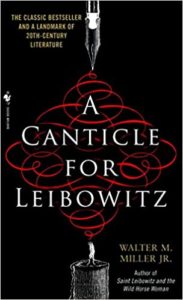 Back when I was a student at Heights High, in the very dim past, a friend of mine recommended a book to me: A Canticle for Leibowitz by Walter M. Miller, Jr., originally written in 1959. The story sounded intriguing but despite his best efforts, and much to his disappointment, by graduation I still had not read it.
Years passed and I had taken the train up to Stratford-Upon-Avon for a weekend of Shakespeare plays. It was a very rainy weekend and, having already seen the Shakespeareana sites previously, I searched the paperback rack at the railway station for something to read between performances. Much to my surprise, a single, slightly dog-eared copy of Canticle was sitting on the spinner. The man at the station sold it to me for two shillings, gave me the name of a bed-and-breakfast down the road, and sent me on my way.  I was all set.
I have a vague recollection of seeing Richard the Second which the man in front of me kept calling Dicky 2 and perhaps Loves Labours Lost. I do remember a delightful  evening listening to the songs of Donald Swann, of Flanders and Swann fame, when he introduced his authorized new works based on the song-poems from JRR Tolkien’s The Hobbit.
However, what I remember best from that rainy weekend was sitting in the single chair in my B&B room, still 1 pound for a nights lodging and a hearty morning meal in those days, and reading practically nonstop. I was mesmerized. What a story. Or actually what stories as the book chronicles the events in the lives of  the Blessed Leibowitz’s followers over the course of centuries.
A Canticle for Leibowitz starts 600 years after the world has been destroyed by a nuclear war. In response to the Flame Deluge, civilization has failed and people are hunting the scientists and engineers who they hold responsible. Society has gone through the Simplification and the Simpletons are out looking for reminders of former times. Books are burned, libraries gutted. And through all this, Edward Leibowitz and the monastic order he creates try to save as many books and as much knowledge as they can. The book follows the Order through the centuries as they wait to rekindle the spark of knowledge by preserving the Memorabilia at their abbey.
To finish my story, some years later, at our 20th Reunion, I ran into this former friend and I told him how much I had enjoyed the book. “Well it took you long enough,” was his response.
A Canticle for Leibowitz by Walter M. Miller, Jr. is available at the Heights Libraries in book, audiobook on CD and Playaway formats plus as an Overdrive audio download. Enjoy. (Just don’t wait too long.)