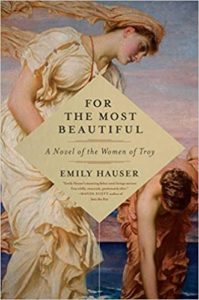 Have you read The Iliad lately? Nope, I haven’t either. I’ll just go ahead and mention that The Iliad is Homer’s big Greek epic poem with the judgment of Paris and Helen of Troy and the Trojan Wars. In fact, I have never read The Iliad, but I might be tempted if it were as interesting and accessible as Emily Hauser‘s debut novel.

Let me explain. In her book, For the Most Beautiful (which is the first in a planned trilogy called The Golden Apple Trilogy), Emily Hauser tells the story of the Iliad in the form of a novel. And, added bonus, it is the story from the point of view of women! Two women who live in the beautiful kingdom of Troy, the city built by the god Apollo, the city ruled in peace and majesty by King Priam and Queen Hecuba. Krisayis is the daughter of a priest and is living in the royal palace in Troy, the lady closest to the Princess Cassandra (and we all know who she is. Right?). Breseis is a princess who has had all kinds of problems getting married because of a prophecy from the gods, and is ecstatically relieved to finally marry Prince Mynes of Lyrnessus. Both Krisayis and Breseis are renowned in Troy for their beauty. Which makes you kind of wonder why Prince Paris had to go and sneak Helen out of Greece, when he had Breseis and Krisayis right under his nose in Troy. The gods have a lot to do with that, of course. Who can explain the machinations of the gods? Especially when they decide that Troy just has to go?

The Olympian gods are featured in the story, because, well, it’s based on a Greek epic. They tend to be lounging around on Mount Ida, quarreling and forming alliances and goading one another into action. Take away the heroic poetry, and the gods really come across as shallow, manipulative, and boorish. But they have to be in the story, and they are kind of amusing in an I-only-want-to-watch-them-from-a-distance kind of way. I especially enjoy Hera when she’s laying down the law to Zeus, and Aphrodite when she’s preening away, acting all conceited about her beauty.

Beauty is definitely a theme in this book. The beauty of Aphrodite, Helen, Breseis, and Krisayis drives a lot of the action of the story. But! Breseis and Krisayis are anything but passive about controlling their own fates. Which is what makes this version of the classic epic really enthralling.

Other novels set in ancient Troy include:

The Song of Achilles by Madeline Miller

Lord of the Silver Bow by David Gemmell

The Firebrand by Marion Zimmer Bradley