National Library Week is over, but it did not pass by without some great thoughts of libraries doing good things.  There was this NPR piece that makes a pretty good case for libraries  doing a good job providing pop culture even with other giants like Netflix and Amazon on the scene.  CNN called librarians “masters of the info universe.”  This is a compliment, but as an aside, I don’t think many librarians would be thrilled about wearing the same mantle as the impossibly cut He-Man cast, even if for our alternate info-verse.  I might have called us ‘Librarians of Information Power!’

Either way, I want to show you some rad new books we just got in.  I picked these mostly for the art, but the texts don’t lag at all.  In fact, both of these are just the type of book that get poured over, read again and appreciated differently each time.

In Just One Secon 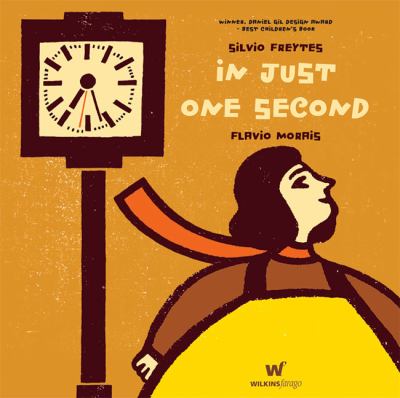 d takes only a second to read.  Not because there are no words, but because the whole book is about what is happening on the 32nd second of the 27th minute late one autumn afternoon.  The citizens of this busy town are out and noticing each other on the phone, coming through doors, walking down the street and generally being around.  Not much happens per se in this book, it’s about what is happens in any single second.  Sort of like the very common and very fun fantasy of freezing time and walking around a city seeing people stuck in mid-step, mid-conversation, mid-door closing.  You can find some sample pages on the publishers website here.  Unfortunately, there’s all too little about Brazilian illustrator Flavio Morais and the thickly-lined, blocky art with the curiously appealing muted citrus color scheme.  I know muted citrus is a strange way to describe a color scheme, but it seems to suit the middle of a time freeze.  Definitely check this one out to see what I mean.

In Just One Second

My Village collects poems from different countries around the world shown both in English and the language of the culture from which they came.  It’s a lovely way to experience familiar scenes and subjects, for instance the French poems about hands, or the Indian song about bathtime.  I have to say that I felt an affinity for this book from page one, because page one is a poem from New Zealand called Big Whale.  It goes like this:

Whale swimming in the sea.

And then you get to read the Maori version, hear the cadence of that language, listen the words of a people who revere and love whales.  A book like this runs a risk of being so sweet it can be hard to swallow, but Danielle Wright did an excellent job of choosing poems with verve and spirit, finding the carefree enjoyment of life’s pleasures like snowmen (from Denmark) and tapioca pudding (from Fiji).Â  Mique Moriuchi’s illustrations use simple paints and collage in sophisticated ways to bring another level of joy to the poetry.

My Village: Rhymes from around the world