Sh*tshow: The Country is Collapsing… and the Ratings are Great 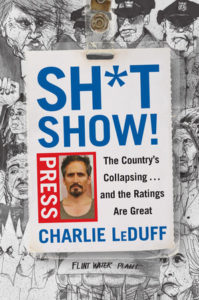 begins in 2013 with reporter Charlie LeDuff in the office of Fox News CEO Roger Ailes pitching a TV segment idea which would focus on what is happening in America “between New York and Los Angeles.” To LeDuff’s surprise, Ailes agrees to let him run the segment. So, armed with fake press credentials (because he didn’t get real ones from Fox), LeDuff ventured out into America to report what he saw. What he found he presents in this recollection of his experiences in the three years his segment, titled “The Americans,” ran on Fox News.

Despite the fake pass, LeDuff is a reporter with an impressive resume, including time working for the New York Times and Detroit News. His writing style is one of the more unique styles I’ve read recently, utilizing a mix of classic and “gonzo” style reporting. Whereas a typical reporter uses a casual observer, “only report the facts” style, a “gonzo” writer makes himself/herself the center of the event they are reporting on. As that description suggests, LeDuff puts himself in the center of each story he writes about, but he also makes a point to give readers a broader picture to contextualize the situations he places himself in.

Throughout the book LeDuff witnesses some of the biggest news stories of the past few years. He ventures into Ferguson, Missouri during the riots in 2014. He visits Flint, Michigan both before and after the world found out that the city’s water was undrinkable. He meets Will Quigg, a Grand Dragon of the KKK, and sees Quigg get told he can’t use the bathroom in a gas station owned by a black man. And, according to LeDuff, Trump seemed to be following HIM as he traveled across the country, not the other way around. Make of that what you will.

Given the nature of the things he talks about, and the way he presents these stories to the reader, you get a good sense of LeDuff’s politics and his views on what America ought to be. You may not agree with everything he says, but this is compelling, relevant reading you can’t look away from. And if you immediately saw “Fox News” and thought “No thanks,” he is very critical of everyone and everything he writes about, and no one comes up smelling like roses. I encourage you to give this book a shot.

Fear and Loathing on the Campaign Trail ‘72 by Hunter S. Thompson

Tailspin: The People and Forces behind America’s Fifty-Year Fall – And those Fighting to Reverse it by Steven Brill