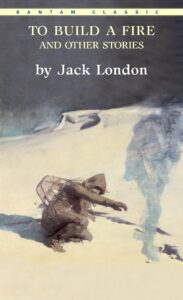 When it comes to Jack London, you will mostly hear about his most famous stories, The Call of the Wild and White Fang. I haven’t read those stories. In fact, I don’t often read “classic” literature. I am unfortunately impatient when it comes to reading the classics. Fiction writers of the early twentieth century always seem to over-explain every little detail in their story, so you won’t miss a thing but have to wait about twenty pages for the plot to move forward.* But, they are considered classics for a reason, and I thankfully have friends who read widely and let me know which stories are the good ones.

One classic short story a friend recommended to me recently was London’s “To Build a Fire”, a story about a young man and his dog (a sort of Husky-type) hiking through the woods along the Yukon River to a logging camp where “the boys” are waiting for him. He and his dog travel alone, in spite of an old man’s warnings about hiking through the woods alone in the extreme -75 degree Fahrenheit Yukon winter (that’s -59.4 Celsius for our international readers). But the man is an experienced hiker, and he is aware of all the dangers he must watch out for on the trail. Eventually, he stops for lunch and builds a small fire to warm himself and his dog for the second leg of his journey. But not long after this, he accidentally steps through a thin patch of ice along the river and soaks his leg in literally freezing water. Knowing the danger of frostbite, he stops again to build a second fire.

“To Build a Fire” is a short story, no more than 40 pages long. London does indulge in relaying the specific details the man must consider while he hikes, whether that’s the changes in the “degrees of frost” he feels whenever he lowers his scarf to spit (which freezes in midair), or how carefully he chooses the spot where he constructs his lunchtime fire. But I found myself very forgiving of London’s over-explanations for this story, because these details add to the tension rather than distract from it. London’s descriptions of the bitter cold serve to magnify the reader’s sense of dread as a series of small but unfortunate events quickly and mercilessly cascade toward the story’s inevitable conclusion. You know what’s coming, but you also know there is nothing the man can do stop it from happening.**

“To Build a Fire” is not just a tale of man vs. nature, which was London’s specialty. It is also a story about humanity’s relationship with nature and how small actions can lead to big consequences. It’s a theme we still grapple with today, which is what I and others think makes this story timeless.

You can place To Build a Fire and Other Stories on hold through Heights Libraries, or get the eBook collection of To Build a Fire, White Fang, and The Call of the Wild through Libby/Overdrive.

*Ask me about my thoughts about The Brothers Karamazov sometime.

**If you’re concerned about the well-being of the dog, all I will say is that you needn’t worry. Too much.