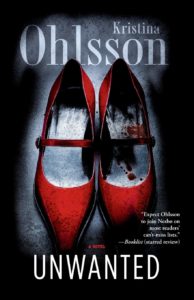 Kristina Ohlsson’s Unwanted (Overdrive Audiobook), recently released in the U.S., is an excellent addition to the rapidly growing Scandanavian mystery field. (Scandinavian mysteries seem to the mystery genre a little like the British Invasion was to music many decades ago, and like that other “invasion,” they’re bringing a fresh development to the genre.) Ohlsson’s debut introduces investigative analyst Fredrika Bergman, a young woman with a sharp mind and a prickly personality who is struggling to prove herself to experienced, senior officers. The interplay among the detectives is entertaining, but the real hook in this book is the crime: a young child has disappeared from a crowded train as it pulls into Stockholm, in what should be plain view of dozens of people, yet no one has noticed anything amiss. As the team fails to find the child, Frederika is sure they are looking in the wrong direction, and she is proved right. Then the crime escalates.

While not quite as sure-handed as Mankell, Larsson, and Nesbo, Ohlsson nonetheless has written a gripping story with intriguing characters that will grab your attention and hang onto you until the last page. This is the first in a series that looks to be a treat.