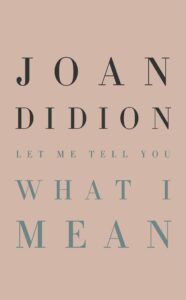 Let Me Tell You What I Mean, by Joan Didion, was published last year shortly before the author’s death. The book contains twelve essays ranging throughout Didion’s career that have not previously been collected.

I remember reading Slouching Towards Bethlehem in high school, and after hearing of her passing, I knew I wanted to revisit her writing.

Didion has a very distinct voice. She is straightforward, but allows her subject to make her point, especially when examining unusual parts of the American life we take for granted. Some of the early pieces written in the sixties are still very relevant today—things like how the big news outlets are untrustworthy, or how damaging it is for parents to micromanage their kids’ lives. In “Last Words”, written in 1998, Didion defends the wishes of Ernest Hemingway, who did not want his unfinished work to be published:

One of my favorite pieces in the collection is about a Gamblers Anonymous meeting Didion attended in Gardena, California in 1968. She can’t quite place her finger on it, but she starts to notice something odd about the meeting. Then it hits her—it’s the way the addicts talk, using words like “serenity” to describe their new lives, and the fanatical way they keep track of dates. Her last paragraph in “Getting Serenity” sums up this feeling:

“’It hasn’t been easy,’ Frank L. said, surrounded by his wife, his children, and his wife’s parents. “But in the last three, four weeks we’ve gotten a…a serenity at home.” Well, there it was. I got out fast then, before anyone could say “serenity” again, for it is a word I associate with death, and for several days after that meeting I wanted only to be in places where the lights were bright and no one counted days.”

Let Me Tell You What I Mean is available at Heights Libraries and as an ebook and audiobook.