Typically, when I read, I like to alternate genres, but I’ve found myself reading a lot of romances lately. They’ve been a nice bit of escapism in an otherwise stressful time to be alive! 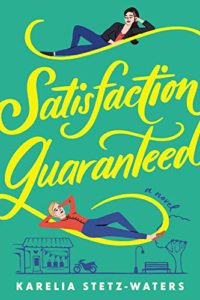 When it comes to her career, Cade Elgin has it all figured out. In a family of free spirits, Cade is the only one who knows how to get down to business. She runs her family’s art gallery and is the most comfortable when crunching numbers. When Cade’s Aunt Ruth dies, Cade flies out to Portland from New York City to attend her funeral, where Cade is the only attendee in black. But then Cade finds out that she has inherited a sex toy store, and she is caught between business and a store filled with every imaginable kind of pleasure—including her infuriatingly irresponsible and deliciously sexy new co-owner. Selena Mathis learned the hard way that she can have too much of a good thing. Which is precisely why she’s taken an oath of celibacy and is focusing on how to make Satisfaction Guaranteed a success. She won’t mess this up. Not this time. But once again, Selena’s emotions are getting in the way, and tempting her with a serious attraction to buttoned-up Cade. Cade and Selena must set aside their differences and attraction to each other, and work together to save the failing shop, or Selena stands to lose not only her income, but also her home. This book has a nice warmth and sweetness to it that I really enjoyed. While things were a little zany or a little over the top at times, I didn’t take things too seriously and I just had fun reading it. 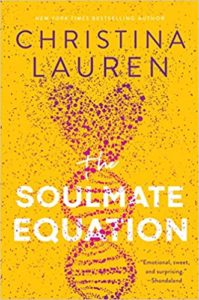 The Soulmate Equation by Christina Lauren

Single mom Jess Davis is a data and statistics wizard, but no amount of number crunching can convince her to step back into the dating world. Raised by her grandparents—who now help raise her seven-year-old daughter, Juno—Jess has been left behind too often to feel comfortable letting anyone in. After all, her father’s never been around, her hard-partying mother disappeared when she was six, and her ex decided he wasn’t “father material” before Juno was even born. Jess holds her loved ones close, but working constantly to stay afloat is hard…and lonely. But then Jess hears about GeneticAlly, a buzzy new DNA-based matchmaking company that’s predicted to change dating forever. Finding a soulmate through DNA? The reliability of numbers: this, Jess understands. At least she thought she did, until her test shows an unheard-of 98% compatibility with another subject in the database: GeneticAlly’s founder, Dr. River Pena. This is one number she can’t wrap her head around, because she already knows Dr. Pena. The stuck-up, stubborn man is without a doubt not her soulmate. But GeneticAlly has a proposition: get to know him and we’ll pay you. Jess—who is barely making ends meet—is in no position to turn it down, despite her skepticism about the project and her dislike for River. As the pair are dragged from one event to the next as the “diamond” pairing that could make GeneticAlly a mint in stock prices, Jess begins to realize that there might be more to the scientist—and the science behind a soulmate—than she thought. The writing duo of Christina Lauren never disappoints and this is no exception. If you’re a fan of fluffy romantic comedies, you won’t want to miss their books! There are lots of swoon-worthy and laugh-out-loud moments in all of their books. 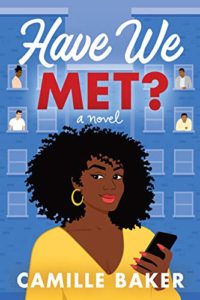 Have We Met? by Camille Baker

What if you already met the soul mate you were destined to be with, and you didn’t even know it? After losing her best friend to cancer, Corinne’s life is in flux. She has moved back to Chicago, is considering her next career move (or temp job), and has absolutely no time to look for love—until a mysterious dating app called Met suddenly appears on her phone, and with it, an invitation for Corinne to reconnect with four missed connections from her past. One of them, Met says, is her soul mate… Corinne doesn’t believe the app for a second, but when she very quickly finds herself with back-to-back blasts from the past, she’ll have to consider if maybe she’s wrong about it. The thing is, Corinne’s also been introduced to a really great guy outside the app’s influence. As their feelings for each other grow, Corinne has to wonder: with her apparent true love still out there, should she tap yes to the next match? Have We Met? features a robust cast of diverse characters, and deals realistically with grief. I also really liked the friendship and camaraderie formed between all of the characters. Cori returns to Chicago after living most of her life in Texas, and while she initially felt alone, she is quickly absorbed into her cousin Tiwanna’s friend group. It seems like this could be the beginning of a series, and I’d definitely read more!