As we finish out the month of Valentine’s day, I wanted to share some of the great modern romances I’ve read in celebration! I also wanted to mention that fellow matchmaker Jenny created a great bookmark, Lovestruck, with even more titles like these, which you can pick up at any of our branches. On to the romantic picks: 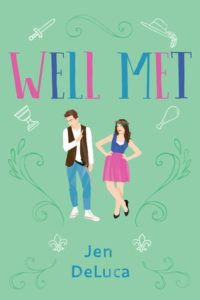 Well Met by Jen Deluca: After a life-shattering breakup, Emily moves to small town Maryland to help her sister, a single mom, and her niece after they were in a car accident that broke her sister’s leg. It’s the beginning of summer and the town is all abuzz about the Renaissance Faire that is held every year, and Emily’s niece is ecstatic about being a volunteer. To Emily’s dismay, there’s a rule that a parent or guardian has to volunteer alongside any minors, so she’s roped into becoming one of two tavern wenches for the summer. Everyone in the town takes the faire very seriously, from English accents and period appropriate faire names, to tight, no-breathing-allowed corsets. She decides that getting roped into the faire isn’t too bad when she meets Mitch, a buff gym teacher that will be wearing a kilt all summer. At least he will distract her from the guy that took an immediate disliking to her, Simon. Simon runs the show and she and him get into plenty of fights over the summer. Emily slowly breaks into the small townspeople’s inner circle, making friends in a place that starts out as temporary, but feels more like a place where she may be able to stay as time goes on. 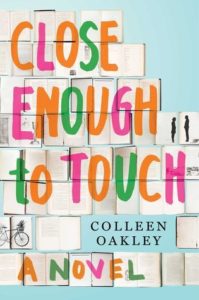 Close Enough to Touch by Colleen Oakley: After not leaving the house for 10 years because of a rare allergy to skin-to-skin contact from other people, Jubilee Jenkins is forced to leave her home to find a job after her mother’s death. Having a love of reading and after earning an English degree online, she decided the library would be a good place to start. Jubilee is terrified of others and the reaction she could have, but she begins to become braver. Eric Keegan, a patron of the library with an adopted son who believes he can master telekinesis, become a regular staple in the reclusive Jubilee’s day. Slowly, feelings develop into a friendship of sorts, and possibly more. Jubilee begins to see that there is more to the world than her created safe spaces in her home and that people aren’t as scary as she imagined. 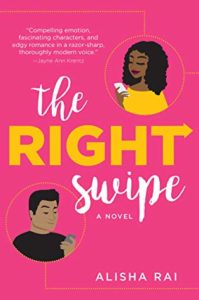 The Right Swipe by Alisha Rai: Rhiannon Hunter is the creator of one of the biggest dating apps in the country, but she wants to be number one. Ironically, she personally doesn’t believe you can really find love on apps, and she uses them for casual dating only. She and the head of a rival dating app company (who happens to be her ex-boyfriend) are going head to head to purchase an older dating website—think of something similar to Match.com. Both need to impress the owner, a well respected but eccentric woman who wants to retire but will only pass on her company to someone she trusts. Rhiannon feels she is well on the way to winning, when a wrench is thrown into her plan. A guy she had one date with months ago who both almost made her believe in love again and who then subsequently ghosted her—ex-football star Samson Lima—appears as the new spokesman for the company she wants to buy. Now she has to figure out how to deal with both her ex who is trying to buy the company out from under her, and face her own romantic life with having to work with Samson on a regular basis during the competition for the bid. 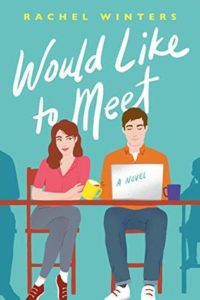 Would Like to Meet by Rachel Winters: Evie Summers has been a screenwriting assistant for seven years, and she finally gets the opportunity to prove herself and get promoted; she has to get her agency’s extremely difficult and full of himself client Ezra Chester to finish his next screenplay, a romantic comedy, by the deadline. The catch? If she doesn’t, the agency is going to fold, so she’ll be out of a job. To inspire him, Evie makes a deal with him—she will embarrass herself by trying to play out the most cliché meet-cutes in real life, and report her experiments to him in great detail. In doing this, she meets a single dad and daughter who become part of her meet cute routine. Pick up this book if you want to know if she aces a meet-cute, falls in love with someone unexpected, saves her company, and finally gets the promotion she’s been waiting for.