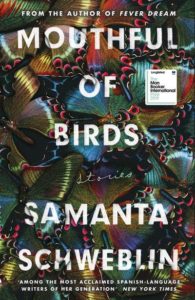 It’s hard to describe how strange and wonderful Samanta Schweblin’s Mouthful of Birds is. I feel like I can’t do these stories justice, but I am going to try:

If you are looking for something to stretch your imagination and launch you into the weird this summer (a more familiar sort of weird compared to our new everyday weird), Mouthful of Birds will do the trick.

Mouthful of Birds is a collection of unsettling, surreal, and oddly beautiful short stories that often leave you with more questions than answers. I finished these stories about a week ago, and have not been able to stop thinking about them. Most of the stories take a similar format: You are introduced to a seemingly-normal situation, but then that situation is subverted by a new element that sends the story in uncanny directions. More often than not, you are not told of key details that would help you fill in the story’s blank spots. And, to top it all off, most of these stories have no true resolution. You are left to wonder at what you just read, and if anything you just read is true.

Let me give you two examples, starting with the title story, “A Mouthful of Birds.” “Birds” begins with a man receiving a visit from his ex-wife who tells him he needs to come over to her house to see his daughter. Once he gets there he sees his late-teen/early-20-something daughter sitting on a sofa staring out the window, while his ex-wife goes to her garage. He and his daughter have a short, hesitant conversation when they are cut off by the return of his ex-wife with a shoe box containing a small bird. His daughter then proceeds to eat the still living bird whole, feathers, bones and all. His ex-wife tells him to take her home with him, which he does. It is bizarre and repulsive, and it only gets stranger as he grapples with his daughter’s obsession.

Then there is probably my favorite story of the bunch. In “On the Steppe,” a young woman and her husband, Pol, move out of the city into the countryside. They say they are researching and using a variety of fertility rituals, and so you might think, “OK. A young couple moving to the country to start a family. So what?” But then we learn that they are using these rituals to help them achieve “something.” It involves doing the ritual and then hunting for it at night, whatever it is, but they’ve had little success. Eventually, the couple is invited to dinner by another couple living a few miles away who did find and capture…one. Because nothing can go wrong at a dinner party with people you’ve just met.

Mouthful of Birds is available at our Lee Rd. Branch (you can put it on hold) or as an e-book and audiobook via Overdive/Libby.