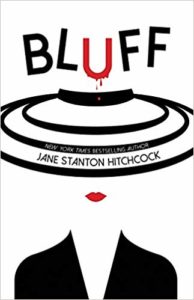 Let me just say this: I would be a terrible poker player. I can’t bluff to save my life. This may be why I thought Maude Warner, the heroine of Jane Stanton Hitchcock’s new noir mystery, was really, really cool. Because she can bluff, she is one terrific poker player, and she literally gets away with murder in this intriguing, twisty suspense novel.

The novel is actually called Bluff, and yes, poker is part of the story. It’s almost an addiction for “Mad Maude,” a former socialite who was reared in affluence but whose family fortune disappeared when a trusted family friend and accountant took over the Warners’ finances. The book opens with Maude crashing a lunch party at The Four Seasons in Manhattan, taking advantage of the fact that women of a certain age are overlooked and underestimated by everyone around them.

You know, honestly, I don’t even want to tell you what the opening scene is. Because I can’t bear to give anything away about this book. Maude is smart and determined to take control of her life back, and the way she does this is clever, devious, and original. The writing is clear, incisive, and witty. We get to hear Maude’s voice quite a lot, because the chapters alternate between a first person viewpoint (from Maude’s point of view, natch) and a third-person viewpoint. It’s set mostly in New York City, mostly in 2014, with flashback scenes to Maude’s earlier life.

If you like mystery, if you like suspense, if you like a little bit of shady noir with your drama, if you like tough heroines who battle the odds to come out on top, you should read Bluff. It’s terrific!

Other darker mystery novels include:

The Child Finder by Rene Denfeld