I typically try to have a theme when I write my book blogs, but this month, I read books that varied widely. So, I guess this would fall under my favorite reads from March and we’ll call that a theme! 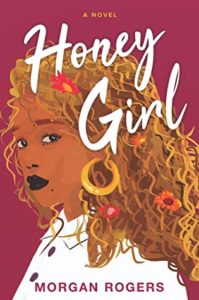 Grace Porter just received her doctorate in astronomy, and though she may not be practicing medicine, as her no-nonsense father intended, she is on track to put her doctorate to use. But as a Black lesbian, Grace doesn’t seem to “be the right fit” for most companies in her field. Then the ever-responsible Grace wakes up in Vegas with a hangover, a wedding ring, fuzzy memories, and a note from her new, and absent, wife. Using a business card, Grace tracks down her wife, Yuki, in New York City. Grace leaves Portland and gives her marriage a shot, staying with Yuki and her roommates. They develop a deep connection. However, the life Grace left behind catches up to her as depression, difficulties reconnecting with her mostly absent mother, and deep wounds left by her disapproving father surface. Can a marriage between two virtual strangers wed in a Vegas chapel actually work when life gets in the way? I absolutely adored Honey Girl. I was expecting it to be a romantic comedy, and while there were some elements of that, it was so much more. Even though the book had a robust cast of characters, they were all well-written and unique, and I loved getting to know them. 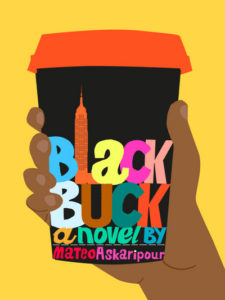 An unambitious twenty-two-year-old, Darren lives in a Bed-Stuy brownstone with his mother, who wants nothing more than to see him live up to his potential as the valedictorian of Bronx Science. But Darren is content working at Starbucks in the lobby of a Midtown office building, hanging out with his girlfriend, Soraya, and eating his mother’s home-cooked meals. All that changes when a chance encounter with Rhett Daniels, the silver-tongued CEO of Sumwun, NYC’s hottest tech startup, results in an exclusive invitation for Darren to join an elite sales team on the thirty-sixth floor. After enduring a “hell week” of training, Darren, the only Black person in the company, reimagines himself as “Buck,” a ruthless salesman unrecognizable to his friends and family. But when things turn tragic at home and Buck feels he’s hit rock bottom, he begins to hatch a plan to help young people of color infiltrate America’s sales force, setting off a chain of events that forever changes the game. I’ve seen Black Buck compared to both The Wolf of Wall Street and Sorry to Bother You and I definitely can see why – the satire and comedy of Sorry to Bother You comes together with the cutthroat business world of The Wolf of Wall Street perfectly here. You’ll love to hate Buck’s coworkers at Sumwun while hoping that Buck doesn’t become one of them. 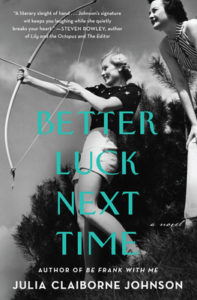 And now, for something completely different! It’s 1938, and women seeking a quick, no-questions split from their husbands head to the “divorce capital of the world,” Reno, Nevada. There’s one catch: they have to wait six weeks to become “residents.” Many of these wealthy, soon-to-be divorcées flock to the Flying Leap, a dude ranch that caters to their every need. Twenty-four-year-old Ward spent one year at Yale before his family lost everything in the Great Depression; now he’s earning an honest living as a ranch hand at the Flying Leap. Admired for his dashing good looks—”Cary Grant in cowboy boots”—Ward thinks he’s got the Flying Leap’s clients all figured out. But two new guests are about to upend everything he thinks he knows: Nina, a St Louis heiress and amateur pilot back for her third divorce, and Emily, whose bravest moment in life was leaving her cheating husband back in San Francisco and driving herself to Reno. Told from Ward’s perspective many years down the line, as he’s interviewed by an unknown person, Better Luck Next Time is based on real-life dude ranches that popped up around Reno in response to divorcées seeing refuge. If you’re a fan of historical fiction, you won’t want to miss this engaging read!