Pride and Prejudice is one of my favorite books in the whole world but I can admit that it might not be a book for everyone! Did you have to read it in high school and hated it? Didn’t even make it through the book? That’s okay, here are some retellings of this classic that you might enjoy instead.

Alys Binat, an English teacher in modern Pakistan at an all girls’ school, knows that her students will most likely drop out to marry rather than go on to graduate but despite this she persists in teaching them the classic literature that she loves. Alys has sworn never to marry even though her sisters are all eagerly on the hunt for a husband. When the news reaches her family that there will be a lavish wedding in their small town Alys’ mother is certain that this will change her family’s circumstances. When Alys’ older sister Jena catches the eye of the rich and eligible Fahad “Bunges” Bingla the whole family waits with baited breath throughout the days of celebration to see if Jena will snag a proposal. Alys is dragged into it by Fahad’s rude but handsome friend Valentine Darsee.

Ayesha at Last by Uzma Jalaluddin 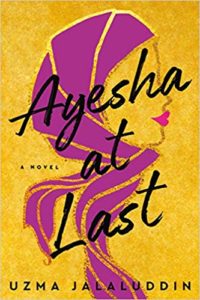 Ayesha Shamsi, a twenty-seven year old school teacher, dreams of a bigger life apart from her small Canadian city. Between familial obligations and needing to pay back her rich uncle who paid for her schooling, Ayesha trudges through days spent as an unappreciated substitute teacher when she would rather be writing or performing poetry. She sees no need to get married and thinks her younger cousin Hafsa is rushing into things by letting her parents arrange her marriage. That is until Ayesha meets, intriguing and irritating Khalid Mirza. While his tone and assumptions about her irk Ayesha she can’t help but notice that he is kind to others around him and unexpectedly modern when he informs her that he can cook which is rare in their close-knit Muslim community. Ayesha feels that she and Khalid and have a connection as they work together to plan a Muslim conference for their mosque so she is bitterly surprised when she hears that her cousin Hafsa and Khalid are engaged. Will things work out for this star-crossed couple? Will Ayesha leave teaching and follow her dreams?

Set in modern day New York, Liz is a writer for a magazine, her older sister Jane a yoga instructor. Their aging father has a health scare and they head back to their hometown of Cincinnati. Their middle sister Mary is busy earning her third Master’s degree and their youngest sister Kitty and Lydia can’t be bothered to find jobs. Their mother desperately wants her daughters to get married and jumps at the chance to invite Chip Bingley, newly arrived bachelor, to a Fourth of July barbecue. This is the fourth book in The Austen Project series, where each one is a modern retelling of one of Jane Austen’s books and each book has been retold by a different author.

Other works in the The Austen Project: Sense & Sensibility by Joanna Trollope, Northanger Abbey by Val McDermid, Emma by Alexander McCall Smith