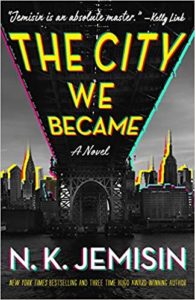 I’ve only ever seen New York City through a glowing screen. Movies, news broadcasts, TV shows, photographs of the Empire State Building, or just from interviews with New Yorkers who are seemingly never shy about talking about how great their city is. It’s almost as if the city has a soul, and its citizens are the mouthpieces with which it can proclaim its greatness. What if cities did have souls? What if they are living, breathing things? N.K. Jemisin’s new novel The City We Became uses these questions as the basis of its plot, and creates an engrossing urban fantasy which reflects, often darkly, our own world.

The City We Became begins with an action-packed prologue where a new avatar for New York is “born”. A nameless young man is befriended by an older man named Paulo. The boy is not sure what Paulo wants, but Paulo keeps telling the boy to listen and learn from him because if the boy doesn’t, New York will die, just like Atlantis and Pompeii. But just as the boy begins to seize the mantle of being New York City, he gets into a fight with a mysterious, powerful force which is trying to kill him. After an almighty fight over FDR Drive, the boy wins—but then something goes wrong. Paulo, realizing that the enemy has somehow stopped the city’s “birth”, goes to find the other five parts of the city. He is going to need them if the boy—if the city—is to live.

From here, five others across New York’s five boroughs begin to experience awakenings to their true selves. A young man just arriving from the Midwest to start grad school gets off at his subway stop and suddenly realizes that he cannot remember what his name is. He takes on the name “Manny” after seeing a billboard that says “Manhattan” when an old man asks him his name. After cleaning up the mess on FDR Drive, he gets cornered by the enemy (i.e. a “Karen” in this case) only to be saved by Brooklyn, a former hip-hop music-icon-turned-city-councilwoman who realized what/who she is as her day went on. They need to find the others—Queens, Staten Island, and the Bronx—before their enemy does. But the other boroughs are going through their own awakenings, and the enemy now has a foothold in the city, and it’s leaving little white, translucent worm-tentacle-things everywhere.

With a plot driven by characters of all colors, stripes, and descriptions, The City We Became is yet another example of why Jemisin is so well regarded among fantasy/sci-fi readers and writers. I’ll leave it to you to judge how well Jemisin represents the city itself. I may plan on visiting to find out for myself!

The City We Became is available for curbside pick-up at Heights Libraries, or check out the eBook on your Libby/Overdrive app.