This month, Tech Trainers Alyse and Ann discuss July classes and cover the Tech Term of the Month, gig economy. They discuss the rise of gig economy-based apps, such as PostMates and Uber and Lyft, the ethics of using these apps, and Ann’s love of constructing Ikea furniture. Don’t forget to send in questions to @librarybinary on Twitter or librarybinary@heightslibrary.org. 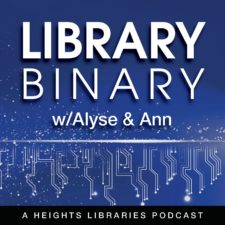