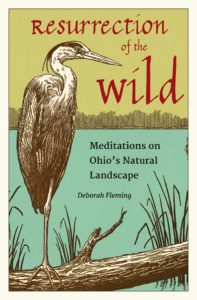 Ohio-based writer, editor, poet, and professor Dr. Deborah Fleming spoke to us over the phone in anticipation of her appearance at the Coventry branch on Wednesday, April 3, at 7 p.m.

Dr. Fleming’s new book is Resurrection of the Wild: Meditations on Ohio’s Natural Landscape. In a series of essays, Dr. Fleming blends her personal experiences living in Eastern Ohio with scientific and literary research, bringing attention to the colorful history and natural beauty of a region worth preserving.

Q:      What inspired you to write your new book, Resurrection of the Wild: Meditations on Ohio’s Natural Landscape? How would you describe it?

A:      I kept for many years (and still keep) a journal and write a great deal about the place I lived. I was always very interested in the natural history of Eastern Ohio and also the place I live now, Ashland County, which is also considered to be Eastern Ohio, as well as the Native American and pioneer histories. When I raised foals, I decided I wanted to write about that experience, and watching the wildlife on the farm, I wrote that down in my journal, and then I decided I wanted to write an essay.

The first essay in the book grew out of the desire to write about a part of the country that many people think has no wildness – nothing natural or beautiful, nothing worth preserving – that’s what inspired that first essay.

Q:      So, how would you describe the landscape for people who aren’t familiar with it?

A:        Well, it’s mostly the eastern deciduous forest. The forests are varied – it’s not all one thing. It’s hardwood and pine and all kinds of things.

Because of early logging, there’s a lot of underbrush in the forest, but as you get farther and the forest gets older, there’s less and less underbrush, and more of the moss-covered forest floor. So I learned to detect that sort of thing when I was on my walks: How old is this part of the forest? Well you can tell by the forest floor and by the trees that grow! The various caves – I shouldn’t use the word caves because that gives people the impression of a very deep recess – but geologists call them rock cities, that sort of stand out from the hillsides that I find intriguing.

Some people think Ohio is very flat. It’s not. The eastern part is much hillier, and it’s the beginning of the Appalachian foothills, so it kind of looks like eastern Tennessee only not quite as steep.

Q:      What is your personal connection with Ohio and the Allegheny Plateau? Can you briefly describe some of the natural and human histories of the region that your book explores?

A:      Well, with regard to the personal connection, I grew up in Eastern Ohio in the hills, so I feel that connection. Right now, I live about five miles from the Native American village of Greentown, where John Chapman, who was called Johnny Appleseed, lived with the Shawnee people. His history is very interesting. He is not the sort of cartoon character he’s been made into.

I live six miles from Louis Bromfield’s Malabar Farm, the first scientific experiment in sustainable agriculture. It’s not a state park. And about as far from the Mohican Forest, which has such an interesting history. It was abused and neglected farmland and then replanted during the 1930s with the Civilian Conservation Corps. Young people from the city came out to the countryside and it was an interesting and apparently very fruitful cross-pollination of different people – small town people and large town people – and now the Mohican Park is the site of disputes over logging and mining and so on.

Also, I spend a lot of hours hiking and riding on trails, mostly in Ashland county and Richmond county, so I have that connection as well.

Q:      Resurrection of the Wild is described as a series of essays, or “lyrical meditations”, which blend your personal experiences living in Ohio with scientific and literary research. Can you talk about why you chose to blend these diverse writing perspectives? What effect do you hope this unique blend of writing styles will have on readers?

A:        Well, they came out the way they did because they were individual essays, individually published. I’ve tried to make them work together. My hope is that the writing engages the reader and inspires them to want to preserve and care for the land. I did not set out to write a memoir, but rather a series of observations about the land and its inhabitants – the plants and animals – and part of the blending of styles came from those journal entries I talked about, together with the more research-type articles about Johnny Appleseed, Louis Bromfield, and the Amish.

Q:      Was there anything that really surprised you when researching for and writing this book? Any major takeaways?

A:        Not surprising so much as learning some history I’d never heard before about areas such as the area known as the Firelands, learning how it was named that, and increasingly surprised by the eagerness with which people are ready to exploit land that was already exploited and had been reclaimed and reforested and logged and farmed without care and then restored and then they want to mine it again. It’s heartbreaking to see land that has recovered so much of its natural character being exploited again.

I was surprised when I learned about the five water conservation districts of the state created after the flood of 1913 – the fact that they were administered by appointed officials with almost no citizen input. Somehow the greatest natural disaster of Ohio, the Flood of 1913, managed not to make it into my history book! And I wonder if the reason for that is the fact that people did not take much care. The land had mostly been denuded of trees, and so when there was a tremendous amount of rainfall, there were tremendous floods. And I had never heard of the Dayton Flood of 1913. Well, the whole state flooded, but the worst of it was in Dayton.

Exactly. And the fire on the Cuyahoga River also piqued my interest and I looked into that as well – what exactly happened and so on. And that is very interesting, but it’s actually a much greater environmental disaster in 1913.

Q:      Talk a bit about your creative process. As a prolific writer, editor, poet, and professor of literature, composition, and creative writing, do you believe it’s important for writers to stick to a regular writing habit? What is your writing process, and does your writing method differ for each style? Do you have any advice for beginning or aspiring writers?

A:        Well, I think the process will be different for each writer and each project. I like to write every day, or almost every day, usually in the morning, and usually for several hours. Sometimes two hours, sometimes four. I do, however, engage in binge writing. I have spent whole days writing. That doesn’t happen very often (not that I don’t want it to), but something, you know, distracts me.

For aspiring writers, I’d say, try writing something every day. And then find out what your best writing time is. Find out when you’re the most productive, and then follow that. Some people say “write every day without fail”. Yes, that’s a good idea, but that’s not the only way to do it.

Q:      Who are some of your favorite writers? What are you reading right now?

A:      My favorite writers include the poets W. B. Yeats, Robinson Jeffers, James Wright, and Eamon Grennan. Leslie Marmon Silko’s novel Ceremony is one of my favorites. E. M. Forster, Leo Tolstoy…

What I’m reading now, I just finished Jonathan Blunk’s biography of James Wright, and am about to start on Robert Olmstead’s novel Coal Black Horse.

Q:      You have an event coming up at our Coventry branch on April 3rd. Can you tell me what you have planned for that?

A:        I’m going to read some passages from different chapters. One from the chapter called “Wedding Plans” about the farm buildings and the history of those buildings. And then the chapters called “The Garden” and “The Inhabitants” are about plant life and animal life. And then I want to read some from one of the last chapters on the new dangers that have come up in recent years with horizontal hydraulic fracturing and so on about conservation and preservation.

Q:      Anything else you would like our readers to know?

A:        Something else that inspired me to write is the long trail down in Zaleski State Forest. Actually it’s the Wayne National Forest, and the Zaleski State Park and Forest. The history of that place is fascinating – the pioneer history and the Native American history – and it’s all documented on their trail guides. So I set out to try to find all the things that they tell you about in their trail guides. It’s like a treasure hunt. They say, “look and see if you can see the Indian mounds”, and sometimes you can, and the cellar hole of an old pioneer cabin, and so on.

For more information on Dr. Fleming’s event at the Coventry branch on Wednesday, April 3, at 7 p.m., click here.

To check out Resurrection of the Wild: Meditations on Ohio’s Natural Landscape from our catalog, click here.

Finally, excerpts of this discussion were recently aired on Biblio Radio — click here to listen to the segment.