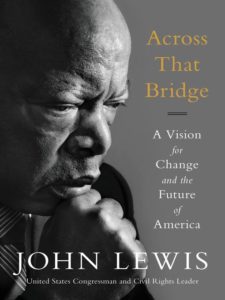 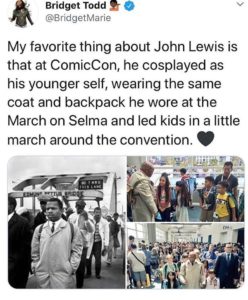 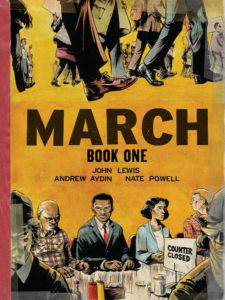 Representative John Lewis, a son of sharecroppers and an apostle of nonviolence who was bloodied at Selma and across the Jim Crow South in the historic struggle for racial equality, and who then carried a mantle of moral authority into Congress, died on Friday. He was 80. Here are some books, graphic novels, and videos written by and about him.

JOHN LEWIS: Get In The Way DVD

Follow the courageous journey of John Lewis, a civil rights hero, congressional leader, and human rights champion whose unwavering fight for justice spans the past 50 years.

Book One spans John Lewis’ youth in rural Alabama, his life-changing meeting with Martin Luther King, Jr., the birth of the Nashville Student Movement, and their battle to tear down segregation through nonviolent lunch counter sit-ins, building to a stunning climax on the steps of City Hall.

After the success of the Nashville sit-in campaign, John Lewis is more committed than ever to changing the world through nonviolence – but as he and his fellow Freedom Riders board a bus into the vicious heart of the deep south, they will be tested like never before.

By Fall 1963, the Civil Rights Movement is an undeniable keystone of the national conversation, and as chair of the Student Nonviolent Coordinating Committee, John Lewis is right in the thick of it.

ACROSS THAT BRIDGE: a vision for change and the future of America By John Lewis

Winner of the NAACP Image Award for Outstanding Literary Work/Biography. In Across That Bridge, Congressman John Lewis draws from his experience as a prominent leader of the Civil Rights Movement to offer timeless wisdom, poignant recollections, and powerful principles for anyone interested in challenging injustices and inspiring real change toward a freer, more peaceful society.

WALKING WITH THE WIND : a memoir of the movement by John Lewis

John Lewis’s life, which he tells with charm, warmth, and toughness, ranges across the battlefields of the civil rights movement — Selma, Montgomery, Birmingham, Mississippi.

Reflections on the Greensboro Lunch Counter