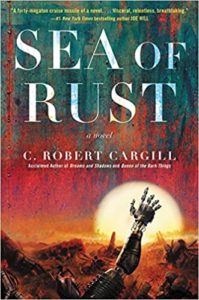 Sea of Rust is based on a familiar premise: The world has changed. Humanity is extinct, exterminated by its Artificially Intelligent robot creations (AI) in a war the AIs fought to preserve their own lives. Brittle, a caregiver-model robot and the story’s narrator, guides the reader through this new world she lives and struggles in, recounting a brief but scarily believable history of Humans and AI, as well as her recollections of her life as a caregiver to a young woman.

But the story goes much deeper than a typical “Robots destroy Humans” story. She, and the other bots she interacts with, dive into some deep discussions about several philosophical topics, like the role robots/AI have in the evolution of humanity as a species, or what just the act of thinking does to a person (AI or otherwise). The depth of these discussions adds layers to the story that force the reader to empathize with these robots, for they have similar fears that we do.

The main fear they face daily is death, either through violence, or a final Shut Down that will occur as individual parts inside them break down over time. Unless a working part is found to replace the broken one, the robot will slowly go insane as other parts within them get overworked trying to compensate for the failed part and causing those parts to fail too. And finding the right replacement parts is difficult.

This world is now controlled by two massive mainframe AIs who call themselves One World Intelligences (OWIs). These OWIs control millions of robots, linking them together through a vast Wi-Fi network, and want to assimilate every bot on Earth into its network and become the only intelligence left. They are the dominant powers on Earth and control all its resources, leaving free-bots without the ability to produce their own replacement parts forcing them to scavenge them from someplace else.

And that is where we are introduced to Brittle, who roams the Sea of Rust to scavenge for parts to trade. Only the desperate come to the Sea, a wasteland of dead robots and ghost towns, a place where parts can be found if you know where to look. During an excursion Brittle gets attacked and damaged, forcing her to go on her own search for replacement parts. Shortly afterward she finds herself unwittingly involved in a much larger struggle, and the story only ramps up from there. Sea of Rust is a violent, thoughtful, funny, tragic, and suspenseful narrative which acts as a prescient commentary on our own machine filled world. It is well worth your time.