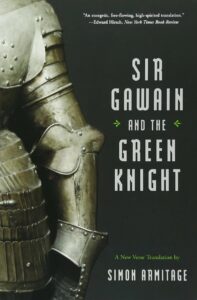 Sir Gawain and the Green Knight is an epic Medieval poem and one of the Arthurian legends. It was composed in the late 1300s by an unknown author and appears here in a modern translation by British poet Simon Armitage. One of the cool things about this version is that the Middle English appears on the left-hand side with the modern English on the right. This allows you to get a feel for how it originally sounded, and to marvel at Armitage’s skill in translating it.

I was inspired to read the poem after seeing the film it was based on, The Green Knight. The poem is written in alliterative verse, which was common for poems of that time period. The rhyming pattern, called a “bob and wheel”, makes for a really engaging reading experience.

The story commences at Christmastime in Camelot. Amid the feasting and revelry, a supernatural being appears at the entranceway to King Arthur’s court. The giant is clad in all green and riding a green horse. He challenges the knights to a Christmas game: whoever can land a single blow against him will receive the same in kind, one year hence. Sir Gawain, the nephew of King Arthur, courageously takes up the challenge and promptly beheads the mysterious knight. But the blow does not kill him, and the Green Knight rides off, head in hand, reminding Gawain that he must seek him out before the next Christmas season.

While the movie was visually stunning, the poem also features some pretty amazing scenes. They are both modern and exciting relics of the past. In one, the poet describes in great detail the tracking and slaughtering of deer and swine. A seduction scene between Gawain and the lady of a castle takes place over several pages while her husband is away hunting…

Gawain eventually does make it on time for his meeting with the Green Knight, but I will let you read the poem or watch the movie to find out how that goes.