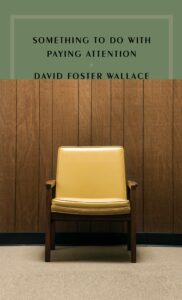 This newly published section of The Pale King gives readers a chance to experience David Foster Wallace on a smaller – but no less brilliant – scale. The setting of Something to Do with Paying Attention is Chicago in the 70s, where a young IRS agent is trying to understand the events that led up to him joining the Service. After years of living aimlessly and using drugs, he realizes that his problem with paying attention may have something to do with his father, who is an accountant for the City of Chicago. Wallace’s lengthy discourse on things like the effect of Obetrol on concentration, and the disastrous State of Illinois progressive sales tax of 1977, somehow manage to make the ending even more climactic. According to the publishers at McNally Editions, Wallace had wanted this part of the novel to stand alone as a novella. Reading it now in 2022, I am struck by just how talented he was – almost unbearably so.