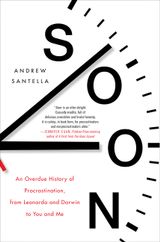 Procrastination is one of those topics that seems to always get people to talk whenever it is brought up. Everyone has a story about that time they put off writing a paper in high school until 9 pm the day before it was due, or the time they filed their taxes on April 14 at 11 pm (or later). These stories are often told with a hint of pride in the storyteller’s voice, yet everyone seems to agree that procrastination is a bad habit. One has to wonder, if so many people confess to it, is it really a habit? And is procrastination as bad as we seem to think it is?

Soon, written by self-professed procrastinator Andrew Santella, details the history of procrastination and attempts to assess the varying, often contradictory, reasons people procrastinate. Using interviews of people from various backgrounds (i.e. psychologists, economists, etc.), current research on the topic and reflections of his own life as a procrastinator, Santella lays out a short but informative study on procrastination. Being a bit of a procrastinator myself, I found myself knowingly nodding whenever I came across a phrase that rang true to me.

Along with his research Santella shares a number of stories about historically famous people who put off doing important projects, such as architect Frank Lloyd Wright’s two-hour drawing session when designing Fallingwater, as examples of when procrastination can fuel greatness. But, Santella also shares stories of people who have tried, and still try, to stamp procrastination out of people, like the story of a steel factory manager in 1911 who would follow his workers with a stop-watch in an attempt to measure how to make them more efficiently. Stories like these begin each chapter, drawing readers into what the rest of the chapter will discuss.

I picked up this book for the blog because it was clear that this was not a self-help, “how to overcome procrastination” book, but because it seeks to better define what procrastination is and why we do it. Santella provides a relatable, balanced explanation of people’s various attitudes toward procrastination and the insights discussed in the book show both the ecstasy and perils that procrastinators experience as they put off tasks. If you’re looking for a book that will make you think about your own procrastination habits, you really should pick up this book.

Soon is available at the Lee Rd. and University Heights Branches of Heights Libraries.

The Confessions of St. Augustine by Saint Augustine, translated by Carolinne White