Sometimes when a book gets buzz that I have no interest in reading, I’ll usually tell people, “Oh, I’ll have to put that on my to-read list” when they recommend it to me, knowing that my to-read list is a mile long and ever expanding. That was the case when one of my friends recommended The House in the Cerulean Sea by T.J. Klune to me last year. Then several of my friends told me I HAD to read it, so I decided to see what the fuss was about it. Folks, my friends were right: you HAVE to read this book, if you haven’t already, even if magical realism/light fantasy is not your usual cup of tea. 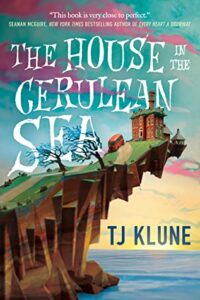 Linus Baker leads a quiet, solitary life. At forty, he lives in a tiny house with a devious cat and his old records. As a case worker at the Department in Charge Of Magical Youth, he spends his days overseeing the well-being of magical children in government-sanctioned orphanages. His supervisor at DICOMY is a joyless taskmaster and the coworkers from whom he sits mere inches apart aren’t much better. Linus keeps his head down and focuses on his work, aiming to be the best case worker he can possibly be—ensuring that the orphanages he’s visiting are properly caring for the children, but not getting too involved.

When Linus is unexpectedly summoned by Extremely Upper Management he’s given a curious and highly classified assignment: travel to Marsyas Island Orphanage, where six allegedly dangerous children reside. Linus actually passes out while reading the files on the children given to him by Extremely Upper Management. Linus must set aside his fears and determine whether or not they’re likely to bring about the end of days. But the children aren’t the only secret the island keeps. Their caretaker is the charming and enigmatic Arthur Parnassus, who will do anything to keep his wards safe. As Arthur and Linus grow closer, long-held secrets are exposed, and Linus must make a choice: destroy a home or watch the world burn.

The House in the Cerulean Sea is an absolute delight! The setting is lush and well rendered, and the characters are all so fantastic. It was such a joy to watch Linus grow as a person, to see him come to appreciate each of the “dangerous” children for who they are, not to be fearful of what they could do. Arthur is so kind and gentle—both with the children, but also with Linus—which was very endearing. I won’t say too much about the children because I don’t want to give away what makes them so allegedly dangerous, but they are each so unique and different, and the way they care about each other is so special.

I highly recommend taking a chance on a book that’s outside the genres you usually find yourself reading. You might be surprised by how much you enjoy it! You can check out The House in the Cerulean Sea in print or audio format at Heights Libraries or get the ebook/audiobook on Overdrive/Libby.