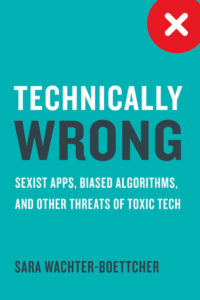 It’s been a little over two months since the death of George Floyd, and the demands for justice and systematic change has not abated. These events have led to a flood of articles online with lists of anti-racist books and resources for people to use to educate themselves. We Matchmakers made our own list of anti-racist books. However, one thing I’ve noticed is that, while many of these lists rightly focus on challenging people’s behaviors and beliefs, most fail to mention the impact technology has on systematic racism and oppression. So, I decided to pick up a book on the subject. The one I chose was Technically Wrong: Sexist Apps, Biased Algorithms, and Other Threats of Toxic Tech by Sara Wachter-Boettcher, a feminist’s take on the impact the implicit biases which tech companies and programmers have that reinforce negative stereotypes of individual groups (minority groups, women, etc.) and the barriers and pitfalls which these groups must navigate online. And she does so in a way which never gets bogged down with jargon or technical explanations.

Wachter-Boettcher takes readers behind the curtain to explain how tech behemoths like Facebook and Uber are designed, and why they operate the way they do. She tackles a specific topic in each chapter. For example, Chapter 2 explores the typical, white male-dominated cultures of major tech companies and how they are not conducive to employees that do not fit their “culture” (read: women and people of color). In Chapter 7, she discusses the algorithms tech companies use to run their search engines and how they are not the cold, unbiased math equations we think they are, but instead reflect their creators’ beliefs and blind spots which often hurt the people they are trying to serve rather than helping them. Meanwhile, throughout the book, Wachter-Boettcher steadily dismantles the myths big tech companies believe about themselves, such as how the talent “pipeline” companies use to find new hires does not have many women or people of color coming through it (spoiler: that’s not exactly true), or the “meritocracy” myth, the belief that being better, smarter, and quicker to innovate is what drives you to the top of the industry, does not work that way in practice.

Ultimately, this book is about helping readers understand how the technology we use every day is created and why users need to start demanding serious change from these companies. If we want to see technology be more equitable and safer for everyone to use, users (read: all of us) need to be able to recognize those flaws and demand tech companies do better. To paraphrase the author’s final thoughts, big tech companies are not evil, but we do need to stop treating them as wondrous, perfect tools that give us exactly what we need in only a few clicks. Rather, we should see them for what they are: a series of design choices which can reinforce what we believe about the world and the people in it. And if there are flaws in those designs, then the results of those designs will be flawed too. If you have ever wondered what protesters calling for “systemic change” mean, or precisely what a “systemic problem” looks like, this book will show you the sort of things they’re talking about. For that reason alone, you should give this book a shot.

Technically Wrong was published in 2017, but many of the problems discussed in the book persist in 2020. Has anything really changed? What can be done about it? Ann, one of Heights Libraries’ Tech Trainers, has written a companion blog post that will help us find some answers. Along with a list of articles citing specific examples and incidents of bias in technology, she also lists tips for how to support BIPOC content creators online. Go take a look!

Other books about bias in technology available to be placed on hold at Heights Libraries or as an ebook through Libby/Overdrive:

Invisible Women: Data Bias in a World Designed for Men by Caroline Cirado-Perez

Other Blog Posts about Black History and Anti-Racism from Heights Libraries:

Podcasts on the History of Police, Prisons, and Race

The Matchmakers List of Books about Race and Anti-Racism