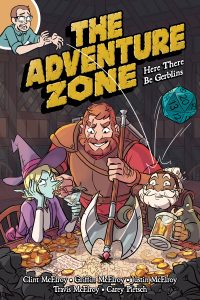 Before I begin telling you all about this book I need to provide some background on the story’s origins. The Adventure Zone is a podcast, an episodic, online form of media akin to old serial radio programs, in which three brothers and their dad play Dungeons and Dragons (D&D) together. The McElroy family, brothers Travis, Justin, and Griffin, and their dad Clint, have recorded over 100+ episodes of The Adventure Zone since its first airied in 2014. With a combination of comedy, good character-building, a very (very) loose interpretation of D&D rules, and the occasional obscure pop culture reference, the show has become a spectacular success.

This book is the graphic novelization of the first story arc of the podcast, titled “The Adventure Zone: Here there be Gerblins.” The story begins in typical D&D fashion: three adventurers are travelling together guarding a delivery for a dwarf merchant named Gundren Rockseeker. They are Magnus Burnsides, your typical fighting man/meathead with a heart of gold, Merle Highchurch, a bumbling dwarf cleric of the god Pan and Gundren’s cousin, and Taako (pronounced ‘Taco’), an elven wizard and former celebrity chef. However, things take a turn when they discover another caravan travelling ahead of them has been ambushed by a band of goblins. A fairly standard adventure story to this point, but not long after invading the goblin’s hideout our heroes enjoy some oolong tea and cake with the goblin chief/HR manager. How did that happen, you ask? You’ll have to read and find out how they did it! Vingettes like these are what make the Adventure Zone so popular, and this book is filled with moments like that.

The artwork in this graphic novel, I feel, does a very good job of capturing the breezy, lively tone of the original podcast while not going in to heavy on the D&D rules and dice rolling you would normally see in a D&D game. The most you see of it is when Griffin McElroy, the Game Master (or, one who controls the game’s story), will pop in at the corners of a panel to add a snarky comment or describe what a character’s voice sounds like. But you do not need to know anything about D&D to enjoy this story. This story, I will admit, might not be your cup of tea, but with the holiday’s coming and family visits coming thick and fast, this book can give you a glimpse at what a very nerdy family might do at one of their own gatherings.

This book is available at the University Heights Branch of Heights Libraries.