Beep Beep!  Coming through!  An Explorastory theme on buses! 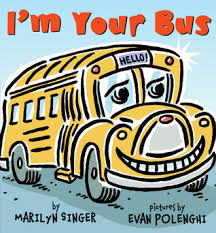 “I’m Your Bus” by Marilyn Singer 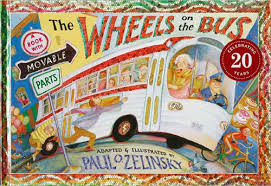 “The Wheels on the Bus: A Book with Parts that Move” by Paul Zelinsky 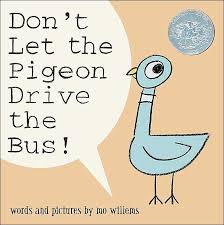 “Don’t Let the Pigeon Drive the Bus” by Mo Willems

Click Here to Order These Books on the Heights Library Catalog

School Bus, School Bus,
Coming Down the Road,
Picking Up the Children,
What a Happy Load

There is a painted bus,
With twenty painted seats,
It carries painted people
Along the painted streets.
They pull the painted bell,
The painted driver stops,
And they all get out together
At the little painted shops.

The Wheels on the Bus

The wipers on the bus go “Swish, swish, swish,”
(Put arms together in front of you and’swish’ like windshield wipers)

The horn on the bus goes “Beep, beep, beep”
(Pretend to honk horn)

The baby on the bus says, “Wah, wah, way!”
(Fisted hands in front of eyesand rub them like baby crying)

(to the tune of Twinkle Twinkle Little Star)

(to the tune of Pop Goes the Weasel)

When we showed the children the flannel board of the bus, we talked about the different shapes on a bus (rectangular windows, circular wheels, etc.).  This helped them make their very own buses out of different shapes cut out of paper.  They glued the shapes together to make the bus and then decorated faces using markers

We saved “Don’t Let the Pigeon Drive the Bus” for last and let the children have their own cut-outs of our special Pigeon for their paper buses if they wanted to include him on the bus (or outside the bus, if they didn’t give in to Pigeon’s pleadings!).