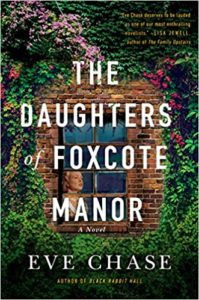 An isolated forest estate.
A family with a terrible secret.
The discovery that changes everything.

England, 1970. On the one-year anniversary of the Harrington family’s darkest night, their beautiful London home goes up in flames. Mrs. Harrington, the two children, and live-in nanny Rita relocate to Foxcote Manor, ostensibly to recuperate. But the creeping forest, where lost things have a way of coming back, is not as restful as it seems. When thirteen-year-old Hera discovers a baby girl abandoned just beyond their garden gate, this tiniest, most wondrous of secrets brings a much-needed sunlit peace, until a visitor detonates the family’s tenuous happiness. All too soon a body lies dead in the woods.

Forty years later, London-based Sylvie is an expert at looking the other way. It’s how she stayed married to her unfaithful husband for more than twenty years. But she’s turned over a new leaf, having left him for a fresh start. She buried her own origin story decades ago, never imagining her teenage daughter would have a shocking reason to dig the past up–and to ask Sylvie to finally face the secrets that lead her back to Foxcote Manor.